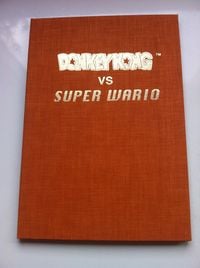 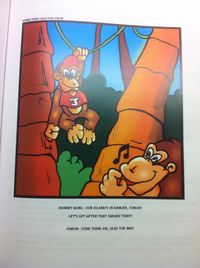 The preview video, Donkey Kong Country Exposed, also contains a few elements that never made it into the final game, such as a nighttime version of Jungle Hijinxs. There were also a few instances where binary digits were seen underneath the lives counter, which may have been a debug menu of some sort. Also, in this build, it was possible to exceed one hundred bananas, whereas in the final game, the banana counter would reset once it reaches that number. Lastly, Donkey Kong was unable to defeat the regular blue Krusha enemy by jumping on him. Unlike the final, Krusha will laugh after Donkey Kong does so, as he would if Diddy had done that. This also applies to Klump, hinting there might have not been character differences in the early game.

Bananas in an arrow shape

There are many unused sprites in this game, such as a Puftup that was later used (with more defined fins) in Donkey Kong Country 2, a jungle plant,[15] various poses and animations for Donkey Kong and Diddy Kong (including a pushing sprite, an action not performable in the final game),[16][17] and a few enemy palette swaps.[18] Also of note is an early Necky that is roughly the size of the Mini-Neckys in the final game, but colored like the adult ones; its animations indicate that it would attack like the ground-based adults in the final, and as such, this may be an early design that both were derived from.[18]

There are a few unused sprites for Puftup, who would later be an enemy in Donkey Kong Country 2: Diddy's Kong Quest. There are also unused sprites for both Donkey Kong and Diddy Kong. Additional letters similar to the K-O-N-G Letters appear in some bonus rooms, though not all letters in the alphabet are used, and the game appears to have the entire alphabet left in the game's coding. The letters F, H, J, L, Q, V, and Z are never used in the game. Slippa has an unused death animation. There is an unused lightning bolt sprite that was presumably meant for Ropey Rampage, which included a lightning effect. There is an unused animation of Cranky being able to walk, which was later added into the Game Boy Advance remake.

The ROM includes a partial English script, which seems to be from an earlier period of development. Differences include Cranky Kong's dialogue being much friendlier than he is in the final game and the Slippa enemy being named "Hister."[18]

Donkey Kong and the Golden Bananas[edit]