The story is told in the game's instruction booklet and features a lot of fourth wall references; it takes place after the events of Donkey Kong Country, where Donkey Kong and Diddy Kong discuss their latest adventure to Cranky Kong. Cranky admits that it was more successful than he thought, but claimed that it was only because of "fancy graphics" and that "Kids'll buy anything nowadays." As Cranky rambles about the games of his time, DK and Diddy try to convince him that Donkey Kong Country was great because it "was just plain fun."

Cranky remains unconvinced, and he challenges Donkey and Diddy to an adventure on an 8-bit monochrome system (the Game Boy). After they make the bet, Cranky arranges for King K. Rool to steal the banana hoard overnight. While Diddy originally agreed to the bet, Donkey Kong was furious because he wanted to watch the Banana Bowl. However, he reluctantly decided to go on an adventure with Diddy to retrieve the bananas from K. Rool. 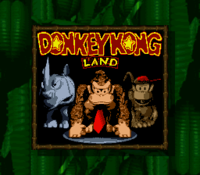 The title screen for Donkey Kong Land, as seen with the Super Game Boy adapter

Donkey Kong near a Continue Point

Donkey Kong Land is a 2D platformer, designed for the Game Boy. Because of the Game Boy's limitations, the game offers less than its 16-bit predecessor. Graphics were ripped from Donkey Kong Country and downgraded to 8-bit to fit Game Boy's limitations. On the level select screen, names of the stages are no longer present, and each level has very few Bonus Areas, usually one or two. Only one Kong displays on-screen at a time, either Donkey Kong or Diddy Kong.

Additionally, after the Kongs find all the Bonus Areas in an area, an exclamation point appears above the level's circular marker in the overworld.

The game is divided into four worlds, each with seven normal levels, with the exception of the game's first world, Gangplank Galleon Ahoy!, which contains a total of nine. A boss level also appears in each world and must be completed to progress. Though most levels are unlocked after beating its previous level, some levels can be accessed before later levels. This can be done by finding rare, barrel-shaped bombs inside some levels and blasting away large boulders. With these boulders destroyed, a passageway to a certain level can be found. Unlike in Donkey Kong Country, the Kongs are able to travel freely to any level without any assistance, as they can simply journey world-to-world on foot.

Like in most platformer games, the goal is to reach the end of the level, without being defeated by an enemy or falling into a trap. The Kongs must make their way through each level carefully, or else an enemy may attack. When this happens, one of the Kongs in the group will run away. With one hero remaining, the player must be careful, as being hit by an enemy or obstacle results in losing a life. The missing Kong can be recovered from a Buddy Barrel, which appears in every level. Star Barrels were replaced with a different type of checkpoint, the Continue Points. Up to three can appear in a level. If the Kongs activate a Continue Point, their progress is temporarily saved at the point, and they would return to that point if they lose a life. Every level has a small portal for an end goal, the end of stage. The Kongs must jump into it to exit the level.

As in the SNES game, Donkey Kong and Diddy Kong are the only playable characters. The stats of these apes both vary, just as in the previous game.

The basic ability, jumping, can be done by both Kongs to defeat enemies, cross pits, or to simply jump to access higher areas. Both Kongs also have the ability to roll or cartwheel into foes. This can defeat the enemies much more easily than jumping on them, and it also gives the heroes an extra speed boost. Sometimes, the Kongs will find themselves requiring to cross a wide abyss too large to jump over. With their cartwheel and roll moves, they can perform a super-jump, making them roll over the gap and jumping in mid-air for an extra boost. Bouncing on a tire can give them an extra boost in the air as well.

Though not used as much as jumping and rolling, the Kongs can also climb ropes and swim through water. To climb, the heroes must simply jump up and touch a rope. Climbing can be useful when crossing large gaps, though it can only be done on ropes. Jumping rope-to-rope is common in some levels, but luckily, the Kongs have no trouble in grabbing onto other ropes. During underwater levels, the apes will also use their ability to swim. Tapping the

while swimming can make the Kongs move higher as they slowly float downwards. When the Kongs swim, they do not have as much control as on land. Additionally, unlike in Donkey Kong Country, underwater enemies are invincible due to Enguarde not being present.

Unlike Donkey Kong Country, Donkey Kong Land has only two Animal Friends, Rambi the Rhino and Expresso the Ostrich, with each appearing in only four levels apiece. The Animal Friends here are unable to shoot through barrels, and they will suddenly drop to the ground once these obstacles are approached.

Donkey Kong Land involves over twenty different enemies and hazards, although most first appeared in Donkey Kong Country. Noticeably, many of them remain common throughout the whole game, not making a final appearance until the last world, the Big Ape City.

* - Was not in Donkey Kong Country

Throughout the Kongs' quest, they not only find the enemies listed above, but also several bosses, who require a little more skill to beat. Each boss appears at the end of all the game's worlds, and must be defeated to allow the heroes to progress. Each one has a simple attack pattern, but their speed goes up considerably the more times they are hit.

Many items can be found around Donkey Kong Land, and each help the duo complete levels or defeat enemies. Each item has a different purpose.

Many objects can also be interacted with in different ways.

Note: Some musical compositions of the game are 8-bit arrangements of other compositions from Donkey Kong Country, which were created by David Wise. They are listed with their original title in the "Music theme" sectors of the following table. Graeme Norgate also participated with several new tunes, also listed here. Their names are posted on Norgate's website, and according to him, they pertain to the game's soundtrack filenames.

If Donkey or Diddy fall with no visible ground below, the game will mistake the player for falling into a pit and will count it as an instant death, even if both Kongs are present. This includes being knocked back by enemies, but also can happen if either Kong falls to a platform below that is off screen.

In some levels, particularly jungle levels, there are Neckys that sit on platforms and spit nuts, hoping to hit the Kongs when they're below him. However, if Necky is on the top of the screen, the sound effect of spitting nuts can be heard, but no nuts are actually fired.

In some cases the player can obtain the second Kong from a DK barrel, but after getting hit it will still result in a death instead of the other Kong appearing in his place. 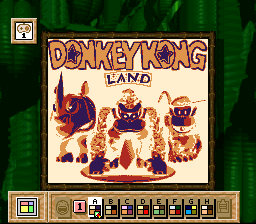 When playing on a Super Game Boy, if the game is on the title screen and the user overrides the palette (either by pressing

to quickly toggle the palette, or

to open the palette selector), the screen has an inverted palette, causing graphical weirdness. This is because this screen has four palettes (for the logo, the Kongs, and Rambi), and the Super Game Boy only allows one background color to be shared across all palettes, which in this case is black (leaving only three colors left for each palette). Since the background color is black, the game inverts the Game Boy's background palette colors to work around this limitation, and then assigns the other colors in a way to hide the inversion. However, Donkey Kong Land does not block the player from replacing the colors, so many of the Super Game Boy's built-in palettes appear inverted relative to other games.

In Donkey Kong Land 2 and Donkey Kong Land III, the palettes are inverted throughout the entire game, since every screen has more than one palette (the life bar and level names at the bottom of the screen use a different palette from the rest of the screen), and the shared background color is once again black. However, these games prohibit the user from changing the colors, which hides this issue and effectively fixes the bug.

Cranky Kong doesn't think Donkey Kong has proven himself to be a hero yet. So, he decides to work out a deal with the closest villain that he knows. K. Rool and his baddies have hidden bananas in new places across Donkey Kong Island in another attempt to outwit the best-friend duo. And the only response is for Donkey Kong and Diddy Kong to go off on another adventure! With over 30 levels plus tons of hidden secrets, swing, roll, jump, and barrel blast through worlds swarming with returning and original enemies. Creep along a mysterious pirate ship, trudge through fierce snow, swim in an unbelievable aquatic temple, and start some crazy capers in the sky. There will also be some animal friends waiting to help out. Cranky Kong is off his rocker if he thinks Donkey Kong won't step up to the challenge.

On release, Famitsu scored Donkey Kong Land a 24 out of 40.