This article is about the video game. For the series with the same name, see Donkey Konga (series).

Donkey Konga is a Donkey Kong video game for the Nintendo GameCube. It was developed by Namco and published by Nintendo in 2003 in Japan and 2004 overseas. It is the first installment of the Donkey Konga series, and it is notable for being the first game to be compatible with the DK Bongos.

Donkey Kong and Diddy Kong are strolling across a beach and suddenly find a mysterious pair of barrels. DK attempts to open it but is stopped by Diddy, who believes it is a trap from King K. Rool.

Following Diddy's advice, the duo take the barrels to Cranky Kong. Cranky chuckles and explains that they are bongos. DK decides to call them the "DK Bongos", and he plays on them. Diddy comments that DK is bad at the bongos, and he tries the bongos. DK, in turn, laughs and claims that Diddy plays the bongos poorly. He claps, which cause the bongos to glow. Cranky explains that the instrument glows and makes noises from detecting clapping.

In response, Donkey Kong and Diddy perform and clap with the bongos more. After they make a lot of loud noise, DK becomes discouraged and admits that he and Diddy are not good at playing the bongos. Cranky explains that nobody starts out as a professional, and their performance gradually improves from practicing. DK initially mentions his dislike of practicing, but suddenly realizes that he might achieve fame if he becomes good at the bongos, which Cranky believes to be a possibility. DK and Diddy then daydream about becoming rich and owning lots of bananas, causing Cranky to sigh and remind them to practice; the pair head out to get some training in as the scene ends.

The main gameplay is largely identical to the Taiko no Tatsujin games, which were also designed by the same developers. The player has the option to utilize the DK Bongos or a standard GameCube controller. During gameplay, the player controls Donkey Kong, whose goal is to hit scrolling notes, known as beats. They must hit it with accurate timing when it moves under a cursor on the far left. There are four types of beats (red, light blue, yellow, and purple), and are each associated with a different button. A word appears on screen for every passing note, and the displayed word is based on the accuracy of the player hitting the beat. A combo is displayed if the player hits two or more consecutive beats, but it vanishes if the player misses a beat.

All four gameplay modes (except Challenge) have three levels of difficulty modes, from lowest to highest: Monkey, Chimp, and Gorilla. The second player plays as Diddy Kong in multiplayer modes. Every song has a varying number of beats, which is indicated from the number of barrels next to their titles on the selection menu.

The player can purchase individual songs to perform on Gorilla (expert) difficulty.

The player can purchase alternate sounds for the bongos to make during gameplay.

The player can purchase three mini-games to play in the ape arcade, two of which have a 2-player competitive (Vs.) mode.

Donkey Konga features around thirty songs, most of which differ between regional release. Every region has songs that originate from other Nintendo titles along with traditional music, including kids' medleys, pop and classical. Almost every traditional song was made into a shortened cover for the North American release.

Aside from a different set of songs, Donkey Konga's North American logo is different from the European and Japanese logo. This change is reflected both in-game and on each region's box cover. The Japanese logo has a subtitle, which western versions do not have. 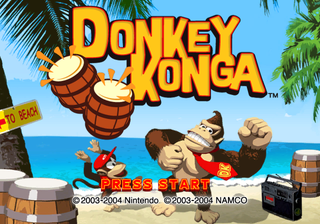 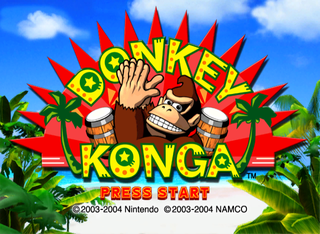 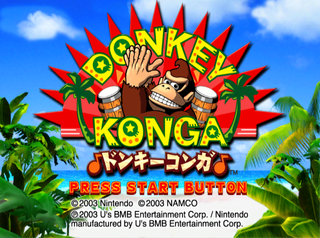 Every title screen depicts a scene of the beach, but the North American one displays a different scene from the European and Japanese versions. The latter two depict a straight view of the beach, which is partially obscured by the game's logo. The North American title screen shows Donkey Kong and Diddy Kong partying at the shore, complete with a pair of bongos and a boombox in the scene.

The logo on the GameCube menu banner is also different between regions. 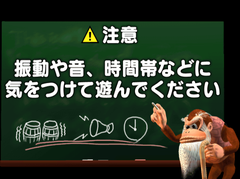 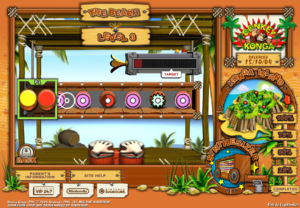 An interactive microsite to promote Donkey Konga was developed by Lightmaker and published by Nintendo in 2004. The microsite allows the player to explore Konga Island to find information about Donkey Konga, and contains four levels of an Adobe Flash version of the game, where the player must control the DK Bongos with the arrow keys and space bar. Konga Island features four areas:

Completing the first three levels unlocks the fourth and final level, which unlocks a downloadable Donkey Konga wallpaper and screensaver upon completion.

“As an executive, I hated Donkey Konga[...] The first game actually sold reasonably well, but boy was I not a fan.”
—Reggie Fils-Aimé

In a 2022 interview, Nintendo of America executive Reggie Fils-Aimé confessed to hating Donkey Konga, stating he had "pushed back" against the Japanese office regarding the game, finding it unfun to play and that it might hurt the Donkey Kong brand.[2]

Hiroyuki Onoda was the director of this game and would later reprise his role for its sequels. Koji Kondo and Toru Minegishi are credited as sound support. Along with Masanori Sato, prominent Mario franchise illustrator Yoichi Kotabe served as graphic support.

References to other media[edit]