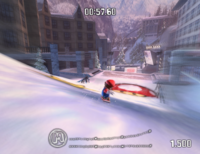 Nintendo Village during the day

Nintendo Village is a level exclusive to the Nintendo GameCube version of SSX on Tour. It is an altered version of the Last Call level featured in the other console versions, replacing it in the selection menu. The track is similar in structure to many others, while it is a winter-themed track featuring various images of different items from the Mario franchise imprinted in the snow and on signs. Several branched paths and shortcuts are also featured, though concealed by these designs. The player may choose any route to their preference. This track may also be played either during the daytime or nighttime. 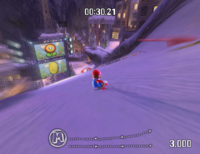 The player's character starts off on top of a very high as well as very steep slope. Heading forward almost immediately, they must aim for the middle ramp in front of the Mushroom imprint in the snow. The ramp launches them through the trees and through two gentle curves featuring Star imprints, although the player must be careful so as not to have their character collide with any of the other snowboarders gracing by.

After a short ramp, the character is launched at a small distance, though falls at a great height due to the landing being much lower. Again, the player must take care to avoid any snowboarders in the area. Using this ramp provides an excellent opportunity for performing several tricks, as does snowboarding off the other ramp provided shortly thereafter. Gaining greater momentum still, the player may guide their character to the left below the signs depicting a Coin and Fire Flower. Shortly after, they are launched over a house and given a brief view of the entire nearby village, along with another chance to perform various tricks.

After this, the player may guide their character into the enclosed tunnel to the left, or follow the branch sticking out of the ground to the right. This takes them to a ramp launching them over the street and into another narrow alley, with perhaps only one other snowboarder in the way. The player is then directed onto a bridge, where they are quickly dropped a great height and given another opportunity for performing a series of tricks. The next opportunity presents itself once the character passes a gentle turn, though there is notably less time for doing so. Taking the paths to the left following this gives the player the quickest and most efficient path as it takes them directly toward the goal, while dropping them from the greatest height yet and giving them one last chance for performing multiple tricks.