The game received a re-release port to the Wii in 2009 (2008 in Japan) titled New Play Control! Donkey Kong Jungle Beat.

Story from the instruction booklet (GameCube):

Pound anything that gets in DK's way as he conquers the kingdoms and becomes the king of the jungle lands!!!

It was stated by game director Yoshiaki Koizumi in an interview in response to the game's minimal story that "The only thing Donkey Kong needs is to be the best, and to become the king of the jungle."[1]

An expanded storyline was added in the Wii re-release.

Story from the instruction booklet (Wii):

One day, the peace of the jungle was disrupted by a rampaging pack of wild baddies who wreaked havoc on the residents of the jungle.

Not only that, but they laid claim to every kingdom and stole each one's precious bananas!

"This calls for the one and only Donkey Kong!"

Join forces with your jungle buddies to face an army of powerful enemies and restore peace to the jungle!

The main goal throughout most of the game is to get to the end of a stage while also trying to earn as many beats as possible. At the beginning of each kingdom, the player starts with twenty beats (two hundred in the final levels) and may obtain more by collecting the bananas scattered throughout the stage and defeating enemies. These beats act as not only a score but also as the player's health throughout a kingdom. Taking damage after the beat total is reduced to zero results in a Game Over, and the player must restart from the beginning of the kingdom. At the end of each level is a fruit, which Donkey Kong must bite into to complete a level. The player can then play a minigame involving attempting to eat as many bananas as possible in a few seconds, giving them extra beats equal to the number of bananas eaten. 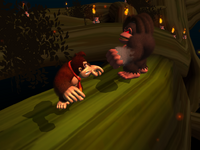 Donkey Kong about to fight Dread Kong, the boss of the Banana Kingdom.

Using the Sound Wave Attack, the player can collect all the bananas in a general area with one move, referred to as a clap grab, which increases the beat count by a greater number than by simply collecting each one individually. In addition, combos, which are obtained by performing special actions (backflips, ground pounds, riding a Jungle Buddy, etc.), also give the player more beats than normal. When one such move is performed, a counter starts at "Combo 2", and performing additional moves increases the counter by one for each action; the counter does not increase, however, for actions performed twice during one combo. Combos increase the amount of beats earned from bananas by the combo number; in the case of banana bunches, this number is also multiplied by three. A combo continues as long as Donkey Kong is airborne and ends when he lands on the ground again; the number of beats collected during the combo is then added to the total. However, if the player is damaged while a combo is active, the player loses all the beats accumulated during the combo.

Most of the Kingdoms in the game contain three stages: two standard levels to earn beats, followed by a boss battle in which the player must deplete the boss' health bar to zero. At the end of each kingdom, the player's total remaining beat count is tallied at the Sacred Tree. By earning a certain number of beats, the player can earn up to four crests from the tree. These crests are used to unlock new kingdoms, as each one can only be unlocked when a certain number of crests have been obtained. By default, the player earns a Bronze Crest no matter how many beats they have, though the others can only be earned by collecting the following amounts of beats:

Donkey Kong Jungle Beat can be played using either the DK Bongos Controller or a standard Nintendo GameCube Controller. When using the bongos, hitting one of the drums repeatedly sends Donkey Kong running in that direction, while holding down on the bongo causes him to walk. To jump, the player must hit both bongos simultaneously, and can use the bongos to move in midair. To jump diagonally, the player must hit the bongo in the direction they want to jump while using the other bongo to run. Hitting both drums in midair causes Donkey Kong to perform a ground pound. The Sound Wave Attack is used by clapping into the microphone. The Jungle Buddies are also controlled by using the drums.

With a Nintendo GameCube Controller, the actions performed by the bongos are mostly incorporated into the

. To move, the player must tap the

in the desired direction in order to move Donkey Kong; holding it causes Donkey Kong to walk, and repeatedly tapping it causes him to run. To jump, the player must press

upwards, and to move in midair, the player must tap the

in the desired direction. The Sound Wave Attack is used by tapping the

. To punch when necessary, the player must tap the

back and forth repeatedly. Moving any of the Jungle Buddies is done once again by tapping the

The selection screen, allowing the option to play any of the 16 kingdoms.

Donkey Kong Jungle Beat contains a total of 16 kingdoms, all of which are named after a fruit. Each kingdom features two normal levels followed by a boss battle, with the only exceptions being Opening Ceremony and the moon barrel levels (all one level each), making 51 total stages and 19 total kingdoms. The settings between the three levels in the main kingdoms rarely have any cohesion with each other, unlike the worlds in most games. Kingdoms are unlocked by clearing each barrel (and in the D Barrel's case, by clearing Opening Ceremony and the Banana Kingdom), but may not be accessed until the number of crests shown on each plaque is obtained.

Each kingdom is contained within one of six "barrels", with each barrel containing four kingdoms, while the moon barrel only has two kingdoms and Opening Ceremony is in its own sun barrel. The four barrels containing the game's sixteen main kingdoms are the "D", "K", "J", and "B" barrels, the letters composing the abbreviation for Donkey Kong Jungle Beat.

Donkey Kong Jungle Beat features a total of eighteen bosses, together known as the Evil Kings.[2] There are four basic types of bosses, one of each occupying each of the main kingdoms in one barrel, while the other two occupy the last levels. The four different types of bosses are:

In addition, the bosses in later barrels gain the attacks used by that type of boss in the previous barrel, and depleting a boss's HP to below half causes them to start attacking with their own additional attack. 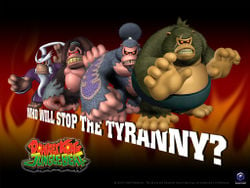 In 2008/2009, Donkey Kong Jungle Beat was ported to the Wii as part of the New Play Control! series of games, a series of GameCube games remade to take advantage of the Wii's motion controls. In addition to the new control style, the port also features new levels, additions and changes to the existing stages, and some gameplay mechanics having been altered from the original version to accommodate the change in controls.

“Our manual writer had an easy job on this one.[1]”
—Takao Shimizu

Development on the game started after director Yoshiaki Koizumi and producer Takao Shimizu attended a meeting featuring the bongo controller developed for Donkey Konga.[3] The team spent some time thinking of mechanics that would fit the controller.

After working on several titles using a traditional controller, Koizumi wanted to make something a different input method. He also heard various complaints that controls in contemporary games were becoming too complex[3] and thus desired to develop a simpler game. As such, he was pleased when the game's E3 2004 demo was well-received by female and "casual" players.[3]

The development team wanted to keep the game's mechanics and presentation as simple as possible to appeal to players intimidated by the complexity of modern games.[1] Elements from previous Donkey Kong games except Donkey Kong himself and the bananas were not featured as the game's development team thought Jungle Beat was too different in tone from previous Donkey Kong titles and that they hoped the game would showcase the style of the newly-formed EAD Tokyo[4] (a statement that would be notoriously mistranslated as Koizumi saying the Donkey Kong Country cast was not "fresh enough"[1]).

Donkey Kong Jungle Beat was the first game developed by Nintendo EAD's Tokyo division, which would later go on to develop every 3D Super Mario game starting with Super Mario Galaxy. The game's producer was Takao Shimizu, the manager of EAD Tokyo Group No. 1, and it was directed by Yoshiaki Koizumi, the manager of Group No. 2, both of whom had been a part of development of several previous Mario games. The music was composed by Mahito Yokota, who later collaborated with other Nintendo staff to compose the soundtracks for various other Nintendo games. Donkey Kong's voice clips were provided by his current voice actor Takashi Nagasako.

At release, Donkey Kong Jungle Beat was well received by critics. The game's main criticisms were its short length and departure from the classic Donkey Kong Country gameplay, as well as a lack of replay value. Donkey Kong Jungle Beat mainly received praise for its advanced graphics, as well as for the unique use of the DK Bongos Controller, which many critics called innovative. The game was rated the 95th best game made on a Nintendo system in the Top 200 Games List by Nintendo Power in its February 2006 issue, and in the final issue the game was rated 130 in the 285 best Nintendo games of all time list.[7] EAD Tokyo would also use the experience from developing this game when they went on to develop Super Mario Galaxy.[8]

By clapping on every frame while on a wall, the player can slide up the wall. Additionally, the player's momentum increases for every clap, causing them to speed away if the player reaches the top of the wall or jumps off of it, similar to the backwards long jump in Super Mario 64.[9]

By defeating one of the two Double Tusks with an attack that brings the total HP of both down to zero, both Tusks are destroyed, but the "enraged" animation (when a boss' HP is below half) for the one that is destroyed second plays instead of the "victory" animation (though the music and sound effects still play).[10]

In the E3 2004 demo, the Party Monkeys are shown to be normal brown monkeys, similar in appearance to Donkey Kong. The Dread Kong boss did not exist, the stand-in boss being a gray clone of Donkey Kong. Most of Donkey Kong's voice clips for the demo were also reused from Donkey Kong 64.