In addition to images, the Super Mario Wiki has the ability to upload media files of the following types:

Wikipedia and other MediaWiki wikis allow these formats because they are either royalty-free and open or because their patent has expired (as is the case with MP3). OGA and OGV files are generally preferred, but if a file has already been uploaded in another format, there is no need to convert and re-upload it since that only takes up more storage space on the server. Files uploaded with a ".ogg" extension should be moved to either ".oga" or ".ogv" (depending if it is an audio or video file, respectively).

Short audio clips for certain characters are accepted in this wiki, since having a few audio samples is a solid method of illustrating a character's personality and voice. Audio clips can also be used to supplement the quote pages, but it should not be overdone. After all, the wiki is not a database for every sound clip from every game, so make sure the audio clip you want to upload is significant. Random sound effects and short grunts, for instance, are inappropriate unless they are generally well-known. Another good use for audio samples is to illustrate the history of the character's voice. Several characters have received a variety of voice actors during their history, but even characters that have used the same voice actors (such as Waluigi, who is always voiced by Charles Martinet) can benefit from having a variety of audio clips.

Ideally, audio samples should have minimal-to-no background noises. If an audio clip needs to be presented in a way that background audio cannot be eliminated easily, such as special events in Comic Con, where Mario and others talk, these should be in video format and be used as an external link, not as an audio file.

Video clips should demonstrate how the game or a particular level works. These can also include cutscenes, trailers for games, and promotional videos licensed by Nintendo. These should not include strategy. This is often an effective way to demonstrate glitches in the Mario games and a better alternative to referencing a YouTube video. It is not recommended you directly convert a YouTube video, however; record yourself trying to recreate the glitch, and be sure to perform appropriate video editing.

Example of the Ogg video.

As with images, media files are uploaded using the upload file page. Embedding and linking are done as follows:

The {{media table}} template is an alternative to the traditional floating element and is used to display an organized list of audio/video files. The table organizes information about each file and makes it easy for the user to play or download them.

The {{multiframe}} and {{multiple image}} templates can also be used, but it isn't recommended. 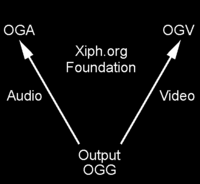 If the output is Ogg, you can change the extension without changing the file contents and without upload errors.

There are various file converters that can be used to prepare media files for upload to the wiki. Note that some of these converters will output Ogg regardless of Theora/Theora+Vorbis (OGV) or Vorbis only (OGA) content. This is fine because changing the extension does not change file contents nor will it cause errors. Ways to change the extension before uploading include (but are not limited to):

If a file with the OGG extension is uploaded anyways, the file can still be moved without errors.

Audacity is a stable, popular, open-source audio-editing program that can open and export a variety of files, including the Ogg Vorbis file. It is the recommended program for any audio conversion since it can convert into any format at any size, for free. There may be some plugins required for encoding several formats, such as for MP3, and there may be commercial audio-editing programs that can do a similar job (such as GoldWave), but when it comes to audio conversion, Audacity is the recommended choice.

Convertfiles.com provides free online conversion of files from and to most of the file types, including archive, document, presentation, e-book, drawing, image, audio, and video files. The audio files can be converted to Vorbis, which later would be uploaded to the wiki.

Online-convert.com is another online converter, but has more file types to choose. The audio files can be converted into Ogg Vorbis (.oga) on this page, and video files can be converted into Ogg Theora-Vorbis (.ogv) on this page. The converter is also limited to 100 Megabytes per file, which is five times lower than Convertfiles.com. To bypass this, try converting the file to FLV and then to Ogg.

Since the functions are an exact copy of Wikipedia's functions, please see Wikipedia's media help page for more information.