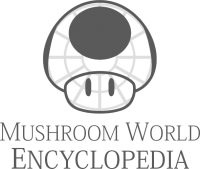 Logo of the Mushroom World Encyclopedia.

The Mushroom World Encyclopedia is a multilingual and open-content project which includes the independent encyclopedias of the Super Mario series from different areas in the world.

The project was created on August 22, 2014 with the objective of connecting the independent Mario wikis in the world, thus providing information and content in as many languages as possible. It's freely inspired by the Encyclopædiæ Pokémonis, a multilingual project based on the Pokémon series. The list of alternative languages for each article is positioned in the sidebar.

The project logo is a stylized Super Mushroom with the projection of the planet Earth in the background. This is also inspired by the Encyclopædiæ Pokémonis and is reminiscent of the Flag of the United Nations. However, the project has yet to officially launch a proper portal website since there are not enough members as of January 2019.