Captain Rainbow (Japanese: キャプテン★レインボー Kyaputen★Reinbō) is a game for the Wii that was released in Japan on August 28th, 2008. It was developed by skip Ltd. and is published by Nintendo. The game's hero is a character called Nick. He has an alter-ego, Captain Rainbow. Several Nintendo characters make an appearance in the game.

The game was only released in Japan and Taiwan. The UK-based Official Nintendo Magazine mentioned a possible release of Captain Rainbow in Europe in summer 2009. However, this did not happen for unknown reasons.[1]

Nick comes from Mameruca, "The Land of the Free". His alter-ego Captain Rainbow is a yo-yo-wielding superhero who stars in his own TV show. However, the show isn't popular anymore, because another superhero attracts the interest of the audience. In order to restore his lost popularity, Nick decides to venture to Mimin Island, an island where wishes are said to come true.

In a dark night, Nick ventures to the island by raft. During his journey, he notices a bunny-like creature desperately paddling in the water. In order to save this being, Nick transforms into Captain Rainbow and jumps into the water. However, his try fails and he sinks. The superhero loses his belt, which is needed for the transformation, and so Captain Rainbow turns back to the ordinary Nick.

When Nick regains consciousness, he has been washed up at the beach of Mimin Island. After a short moment of confusion, Nick spots that his belt is missing. Then he sees the belt being carried away by bunny-like creatures who have obtained it. Since this special item is essential for him, Nick starts exploring the island. It doesn't take much time to get the belt back. On Mimin Island, Nick meets various Nintendo characters who also came there because of their own dreams and wishes. During their conversations, he learns that no one's wish has actually been granted so far. Only with the help of a chosen hero, Nick, or rather Captain Rainbow in this case, the wishes can be granted. Nick decides to help the islanders. The hero gets support from bunny-like beings called Mimin, the dominant species of Mimin Island.

The player's task is to control Nick or Captain Rainbow in order to enjoy the island life with the other islanders and to help them. They all have their individual requests, which can lead to minigames such as boxing or golf. Nick can also do activities like fishing and bug catching. There are no strict presettings for what to do on the island.

By helping the islanders, Nick gets Kirarin (literally "Sparklies"). If 20 Kirarin are collected, a star will fall from the sky, which can grant a wish. It has to be carried to an altar on the top of the island. While doing this, mysterious black creatures named Shadows challenge Nick in order to get the star for themselves. If Nick successfully brings the star to the altar, the player is presented with two choices. Nick can either let the star grant his own wish to become popular again, or the wish of an islander. By taking the latter choice, the wish of the islander comes true and Nick has to collect new Kirarin to make another star appear.

Captain Rainbow contains characters and other elements from various franchises, some of them being taken from the Mario franchise.

Birdo's appearance in the first trailer.

One of the Nintendo characters who traveled to Mimin Island is Birdo, who claims to be the "Sexy Dynamite Monster". She came to the island to become attractive and popular with boys. Birdo has a very cheerful nature; however, she can get very angry when things go wrong for her. On Mimin Island, Birdo resides in the so-called Cute Home. It is located on a remote place of the island which is separated from the rest of it. The Cute Home represents Birdo's personality and her likings. The interior consists of mostly pink and red furniture decorated with many heart and ribbon emblems.

Captain Rainbow also makes reference to Birdo's gender controversy, giving her a distinctly male voice, and by the situations Birdo stumbles into. The voice was first heard in the first trailer of Captain Rainbow, where Birdo introduces Nick and his alter-ego, making her the first confirmed guest character. In the second trailer, Little Mac speaks about Birdo. After he calls her a "young lady", he pauses briefly, then says that "Depending on one's viewpoint, she is a young lady."

Like it has been done with many characters in the game, Birdo's appearance has been significantly altered. Her head is much bigger in comparison to her torso, and her cheeks are peculiarly stout.

Birdo is one of the characters who already appears at an early point in the game. She was wrongly suspected of a crime and imprisoned. When Nick finds her, she is imprisoned in a cage at the police box of Mappo, the robot jailer from the game GiFTPiA. Officer Mappo "punished" Birdo because she was using the female bathroom, and the robot did not believe that Birdo is a girl. She is so angry about her prison that her speech is partly censored by audio bleeps and X signs. Birdo asks Nick to go to her Cute Home and find something there that proves that she is female. Nick does so and when he looks into the house, he finds a special object under the pillow on Birdo's bed. It is only mentioned to be proof that the owner is female and is never seen by the player because it is covered by a question mark, though the object in question is heavily implied to be a vibrator. 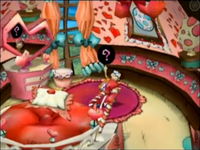 Nick then returns to the police box and shows Mappo the object. Being convinced now that Birdo is a girl, the officer lets her out of the cage. In order to thank him for her rescue, Birdo "kisses" Nick (in the form of a floating heart), which knocks him out for a moment. Birdo gets a crush on Nick, calling him her boyfriend.

Birdo eventually goes back to her house. She enjoys going on strolls and watching the beautiful nature. Nick can accompany Birdo during her trips, making her very happy. Birdo also likes to sing while doing so.

After a Star has fallen from the sky, Nick can offer Birdo to carry the star with her to the altar on the island's top. When the team manages to get to the altar with the Star without being beaten by the Shadows, Nick has the choice between Birdo's and his own wish. By choosing Birdo's wish, she adheres to the Star and flies with it towards the night sky and disappears. For a brief moment, Birdo's face is seen in the sky.

After Birdo's wish has been granted, a gallery with concept art of Birdo and the Cute Home will be unlocked. When viewing the gallery, Birdo's theme song from the game plays, which is, in accordance with Birdo's personality, a cheerful song featuring singing. As for most characters, the gallery has three pages.

Another creature from the Mario series appearing in the game is a Piranha Plant, though its role isn't as significant as Birdo's. The Piranha Plant is found in the garden of Lip's house. Lip is a fairy and the protagonist of the game Panel de Pon, which was remade into Tetris Attack for the west. When the Piranha Plant feels bad and hangs its head to the ground, Lip casts a spell on the plant. After doing so, the Piranha Plant is healed and straightens up at once. At a later point, the plant is decorated with a blue ribbon.

The Piranha Plant's involvement was confirmed by the second trailer of Captain Rainbow. The appearance of it is altered as well. Its sharp teeth are irregularly arranged and of different size, unlike the teeth of the Piranha Plants seen in the Mario games.

Cheep Cheeps and Bloopers are among the sea creatures which are catchable in the fishing minigame.

Artwork of a yellow Warp Pipe.

Different colored Warp Pipes are found on Mimin Island. Like in the Mario series, Warp Pipes are used for quick transportation from one point to another. When using a Warp Pipe, the well-known Warp Pipe sound from Super Mario Bros. is heard. The remote place where Birdo's Cute House is located can be reached via a pink Warp Pipe.

Portraits of Mario and Link above Tracy's throne.

Though Mario himself does not make a direct appearance in the game, there is a Mario cameo nonetheless. A portrait of him is above Tracy's throne, next to a portrait of Link. The Mario picture is actually artwork from Mario Party DS. The portraits were first seen in the fifth trailer.

The Nintendo characters appearing in the game are all characters who didn't make it to stardom. Furthermore, they all originate from past games released in the 1980s and 1990s, except for the characters from games developed by skip. The following play important roles in the game:

Besides these, some generic enemies from the Mario franchise also appear:

New characters with important roles created for the game: