From the Super Mario Wiki, the Mario encyclopedia
(Redirected from Donkey Kong: Barrel Blast)
Jump to navigationJump to search

Donkey Kong Barrel Blast (known as Donkey Kong Jet Race in European languages) is a racing game in the Donkey Kong franchise. Initially announced for release on the Nintendo GameCube with support for the bongo controller, it was released for the Wii in mid-late 2007 in Japan and North America and early 2008 in Europe and Australia. The game was developed by Paon, who previously developed DK: King of Swing and its sequel DK: Jungle Climber.

This racing game, unlike most other racing games, takes place in the sky, where three dimensions of navigation are used rather than two. Players race around courses using rocket-powered bongos, and during a race, players are able to use items, Wild Moves and shortcuts in an attempt to reach first place. The items are used to give players advantages over their competitors, similarly to the Mario Kart series, though the game has various other elements unique to it, such as using Wild Moves to gain a speed boost or riding on Animal Friends to smash through obstacles. The game makes heavy use of motion control during the race, where players are required to use the Wii Remote and Nunchuk accordingly to perform various moves, such as accelerating or jumping. The game supports up to four players, but only in the Jungle Grand Prix and Single Race modes; the other game modes are for only one player. Jungle Grand Prix, the main mode of the game, features eight racers in a multi-lap race to the finish line on a given race track.

This game requires twenty-two blocks on the player's Wii system to save game data, and the game data can also be copied and moved to an SD card or transferred to another Wii.

The vehicular form of transportation in Donkey Kong Barrel Blast are rocket-powered bongos; due to their aerial nature, the racers are unaffected by the course's grounded terrain, but they move slower underwater and automatically reach their top speed inside a wormhole and when entering a Launcher Barrel. As with all racing games, players pick a character with varying stats, strengths and weaknesses, and race around an obstacle filled course in an attempt to finish in first place out of eight competing racers. During a race, players can obtain items from balloons and use them to interfere their rivals progress, which draws inspiration from that of the general Mario Kart series. Additionally, also drawing inspiration from the Mario Kart series, more powerful items are awarded to racers who are further behind; players in first place are likely to get either the weaker Banana Bunches or Backward Barrels items, while those near last place may get a Crystal Coconut, Mega TNT Barrel or Quawks. When a race is completed, players receive a certain amount of points depending on which position they finished a race in. The player with the most amount of points at the end of the set of races is the winner.

Donkey Kong riding in a Minecart on Scorching Canyon.

Bananas are found on the racetracks and are used to fill up a gauge that contains Wild Moves, which give players a small speed boost when used; this move can be extended by repeatedly crashing into barrels, certain enemies like Zingers or other players, making them lose ten bananas. Players can carry up to six Wild Moves. Players are also able to attack obstacles and other players, and any player hit by an item loses ten bananas. Additionally, players can perform a jump to avoid obstacles.

A unique feature in this game is the ability to ride a Toboggan, a Minecart, as well as Animal Friends. The former two pits the player in a small bonus game were they can obtain more bananas and use the bonus area as a shortcut, while the latter allows a player to break through obstacles. Several types of barrels are also present, each with a different purpose. Normal barrels are weak obstacles that are essential to Wild Move combos, Iron Barrels significantly slows down a player who bumps into them while Launcher Barrels can be used as shortcuts. Players also encounter some wooden panels with a red !-mark on them. These are known as Surprise Panels, and they summon a wide variety of items after being touched. Some examples are Golden Bananas, barrels, and Launcher Barrels. Three difficulty levels not only control the difficultly of CU players during a race, but how fast a player will move once they reach their top speed, with Rookie being the slowest, Pro being medium and Expert being the fastest.

Point spreads works identically to Mario Kart: Double Dash!! and Mario Kart DS. If two or more human players are playing, only four racers are present but the point spread remains the same. 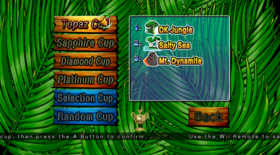 The player selects two to five of any of the race courses, but one race course cannot be selected twice. This trophy is not displayed on the selection screen no matter how many times it is beaten.

The computer randomly picks out five tracks for the player to race on. Like the Selection Cup, the trophy is not displayed on the selection screen. The trophies given during the award ceremony have differing designs and sizes, depending on which cup was beaten.

There is also the Training Course, which is not used in any of the cups, but it is used in Cranky's Flight School, some of Candy's Challenges and during the credits upon winning the Platinum Cup. 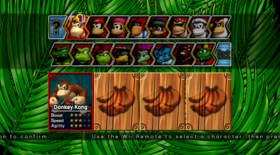 Including Ultra Barrel DK as a separate character from Donkey Kong, Donkey Kong Barrel Blast features a total of 17 playable characters (consisting of 9 Kong characters and 8 Kremling characters). 6 characters are available from the start and 11 are unlockable. Kip, Kass, Kalypso, and Kludge make their first appearances in this game. The game also marks the first game appearance of Lanky Kong (excluding remakes) since his debut, which was released 8 years prior. Unlockable characters can appear during races, but Wrinkly Kong, Cranky Kong, and King K. Rool need to be unlocked before they can appear as CPU opponents. Ultra Barrel DK never appears as a CPU opponent even after being unlocked, as he can only be used by human players.

Each character has three stats, all of which are shown when highlighting them on the character select screen.

These characters act as obstacles and tries to attack racers. Racers slow down when struck by their attack or by colliding with them directly. A defeated enemy rewards a racer with ten bananas. Defeated enemies respawn after a while.

A red balloon and a blue balloon

Items are obtained from balloons on the racetracks. There are red balloons and blue balloons, the former being associated with the Kongs and the latter being associated with the Kremlings. When a racer goes into a balloon of their team's color, the effect of the item may last longer than if the other team got it. Some balloons change color after being picked up. The item that racers get from a balloon is influenced by their current race position.

In order to hitch a ride on either of them, the player must run into the animal crate on the track with their picture, where the box either stays still or moves back and forth in a line for players to catch. They cannot hurt another racer by touching them, but they are immune to being damaged by both racers using Wild Moves, their attacks, as well as all items, except for the reversed control effects and loss of Wild Moves from a Mega TNT Barrel. Their animal crates respawns to their original location once a riding racer reaches the end of the Animal Friend's area.

Donkey Kong Barrel Blast features a variety of Barrels. Some of them can be spawned by touching a Surprise Panel.

The game was originally planned for the Nintendo GameCube for use with the DK Bongo Controller. The red balloons originally had the DK logo on them, before being changed into question marks in the final version. Some of the character sprites, such as Donkey Kong, Funky Kong and Kritter were originally artwork reused from DK: King of Swing. Donkey Kong Barrel Blast had gone through some working titles, such as "DK Bongo Blast" (when it was going to be a GameCube title) and "Donkey Jet".[2] 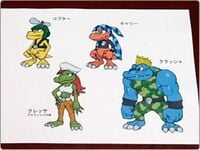 Following the completion of DK: King of Swing, producer Toshiharu Izuno and the Paon development team wanted to follow it up with a home console game that could be enjoyed by the whole family together in front of the TV Screen. Initially, Barrel Blast was developed as a more traditional racing game[3] as the developers had difficulty letting go of certain genre conventions, but when the prototype of this version of the game was demoed inside Nintendo, there were multiple feedbacks expressing that the game needed a bigger sense of fun and be more intuitive to make sense as a Wii title. The developers experimented with having all controls done through the Wii Remote.[3] Tuning the game's controls was a difficult balancing act: assistant producer Ryunosuke Suzuki described an instance where, after playtest feedbacks complained the timing for making jumps was too strict, the revised version had the opposite issue of having jumps be too easy to trigger by accident.[3]

Speaking of the game's use of the Donkey Kong theming, Izuno explained that Nintendo did not want Paon to feel constrained in making the game, asking them to first design an interesting racetrack before considering how well it fits the Donkey Kong world.[4] Paon suggested the idea of new Kremlings characters, prompting Nintendo's internal character design team to design the new character.[4] The development team approached Barrel Blast as a "racing action game", wanting to emphazize features such as avoiding obstacles, triggering course features and jumping over or destroying objects.[4] As Paon knew the game would be one of the first 4-player racing title on the console, it was deliberately designed to be simple and accessible.[4]

The game director is Kenichi Imaeda, and supervising is done by Shigeru Miyamoto and Takashi Tezuka. Paon's president Rikiya Nakagawa is one of the three producers of the game, Eiji Akahori is the lead programmer and Takashi Kouga composed the game's music.

Donkey Kong Barrel Blast was met with mostly negative reviews for its slow racing, imprecise controls, a lack of online mode, and that the Bongo Controllers were left out of the game even though GameCube controllers are completely compatible with the Wii. It has an average score of 43.94% from 32 reviews on GameRankings and an average of 46 based on 34 reviews on Metacritic.