“Squawks is the one animal that you cannot ride, but he is helpful nonetheless. You can find him in the darkest cave level. Once you release him, he will hold a flashlight that will help light your path. Because he is so essential to success in this darkened level, he's not too hard to find when you need him.”
—Donkey Kong Country instruction booklet, page 25 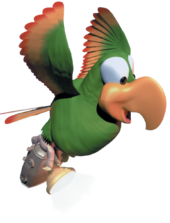 Artwork of Squawks holding a lantern from Donkey Kong Country

In Donkey Kong Country, Squawks only appears in one level, Torchlight Trouble. His Animal Crate appears at the start, and when Donkey Kong and Diddy Kong break it open, Squawks begins to follow the Kongs through the dark cavern. Squawks is about half the size of the Kongs, and he carries a bright lantern with his talons and uses it to light up the surrounding area, which enables Donkey Kong and Diddy to see a bit of the path ahead. Squawks is the only Animal Friend who cannot be mounted and to not have an associated animal token and its own corresponding area.

Early in Donkey Kong Country's development, Donkey Kong was meant to use a mining helmet in "dark levels", and is depicted wearing it in two pre-release promotional renders. The item was eventually scrapped and replaced with Squawks.[1] 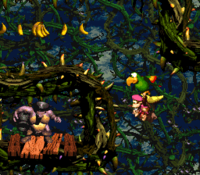 In Donkey Kong Country 2: Diddy's Kong Quest, Squawks not only has a much larger role, but was also made larger, around the size of Diddy and Dixie Kong. He no longer carries a lantern around, but instead is able to carry the Kongs with his talons and fly them around. Aside from height, Squawks has a somewhat similar appearance as in Donkey Kong Country: his official artwork was recycled from the previous game but with some added detail and the removal of his lantern.

Squawks can spit out an unlimited number of eggs to attack other enemies. In some levels, the Kongs can ride Squawks after freeing him from his Animal Crate. In some other levels, the Kongs can directly transform into Squawks by jumping into an Animal Barrel. In both cases, the player can control Squawks until he passes the No Animal Sign. Squawks can fly around faster when transformed into, because he is not slowed by carrying the weight of the Kongs. Squawks does not fly away if he gets hit by an enemy or obstacle, but instead drops a Kong from his talons. He first appears in the level Squawks's Shaft, which also features his name in the title.

Squawks is the first Animal Friend to fight a boss in the series and the game itself. He fights King Zing, a large Zinger and the boss of Krazy Kremland. In the second half of Screech's Sprint, Squawks races Kaptain K. Rool's pet bird, Screech.

In Swanky's Bonus Bonanza, the player can guess "Squawks," "Squeaks," and "Flapper" when determining Squawks's name. 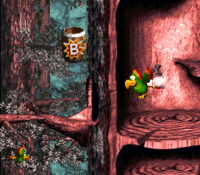 In Donkey Kong Country Returns, Squawks is sold for 15 Banana Coins at Cranky Kong's Shop. When purchased, Squawks appears at the bottom-left corner of the screen in a level. He assists the player in locating undiscovered Puzzle Pieces throughout that level. Squawks yells whenever an undiscovered Puzzle Piece is nearby. Squawks can also find switches in the Factory world, which are needed to open the path to Feather Fiend. The Kongs use Squawks an unlimited number of times if they can afford it. Additionally, while scrolling through the island map, the player can see Squawks circling around whatever world they are currently hovering over. Starting with this game, Squawks has two backwards-pointing toes just like a real parrot, whereas in previously-released games he was portrayed with only one. 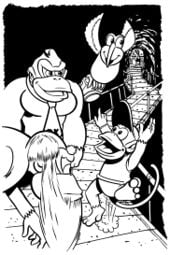 Squawks the Parrot with his flashlight in Donkey Kong Country: Rumble in the Jungle.

In the 1995 novel Donkey Kong Country: Rumble in the Jungle, Squawks the Parrot makes an appearance within the interconnecting caves of several snow-capped mountains. Donkey, Diddy and Cranky Kong become trapped in the darkness of a large cave after an avalanche, while on their way to Big Ape City. Donkey Kong has the idea to call Squawks for help by crying out at the top of his lungs. Several minutes later, Squawks appears carrying a flashlight, and he agrees to show the Kongs the quickest route through the mountain. Squawks brings them to the cave exit which is closest to Big Ape City. After the Kongs thank Squawks, he returns to the caves and the Kongs proceed to the city. 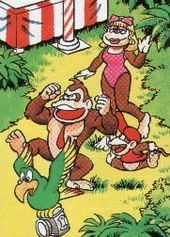 Squawks appears in the second part of the Club Nintendo comic "Donkey Kong Country" as an ally of Donkey and Diddy Kong. He is given to them by Candy Kong at her Save Point, and he brings them to a cave. Inside, the Kongs get attacked by a Kritter. With the help of Squawks, who uses his torch to project Donkey's shadow onto the wall, the Kongs scare the enemy away. After this event, Diddy and Donkey leave Squawks and proceed.

In "Donkey Kong in: Banana Day 24", a comic published in the same magazine, Squawks is seen conducting an "automatic parrot wake-up service" to get the Kongs off their palms in the morning. He uses a microphone and speakers to tell a joke. Diddy calls Squawks a "dumb parrot" and claims that he is telling the same joke every morning.

Squawks makes another appearance in Donkey Kong Land 2. He is mostly unchanged from Donkey Kong Country 2: Diddy's Kong Quest except that, like other Animal Friends, the Kongs cannot ride Squawks due to Animal Crates being removed. Squawks and Quawks have the same sprite due to the Game Boy's monochromatic screen.

In Donkey Kong 64, Squawks appears in the opening cutscene, where he informs Donkey Kong that his Golden Bananas were stolen by King K. Rool. During the adventure, Squawks has various roles: he provides instructions to the Kongs at different parts of their journey. Squawks also carries a lantern in some subterranean locations (just like Donkey Kong Country). He opens most of his dialogue with "Squawk!" and ends them with "Bwark!". Some cutscenes show more than one Squawks.

In DK Isles, if the Kongs play on some Music Pads, Squawks rewards them with a Golden Banana. At Angry Aztec and Fungi Forest, when Tiny Kong shrinks to her Mini-Monkey size and plays on a Music Pad, Squawks shows up and is able to carry her around, first into a tower where she gets in a race with the Beetle, then to the inside of a tree to get a seed, and last to the top of a giant beanstalk. Squawks' role greatly contrasts his role in Donkey Kong Country 2 and 3, where he was able to carry normal sized Diddy, Dixie, and even the very large and heavy Kiddy, with no problem.

Squawks makes a cameo appearance in Picross NP Vol. 8 as one of the images that must be cleared.

A Squawks has a very minor appearance in the opening cutscene for Diddy Kong Racing DS where it gives a letter to Diddy from Timber to inform him of Wizpig's invasion of Timber's Island.

Squawks appears as a common red balloon item in Donkey Kong Barrel Blast. A racer can send out Squawks to target the racer in front of them. When Squawks makes his way to a player, he hovers around them for a short amount of time: the racer cannot use Wild Moves while this occurs. Squawks attacks the racer whenever they attempt a Wild Move, causing them to lose ten bananas. Squawks has a longer attack duration if he is summoned by a Kong instead of a Kremling.

Squawks appears as a trophy in Super Smash Bros. for Nintendo 3DS.

In Super Mario Odyssey, one of the roads in New Donk City is called "Squawks Park Street".

In the Donkey Kong Adventure story of Mario + Rabbids Kingdom Battle, one of Donkey Kong's Bwananarang weapons, the Law of the Macaw, is designed after the appearance of Squawks the Parrot. The weapon's description jokingly states that "enemies are about to learn a serious lesson courtesy of the school of hard Squawks".