Seashore War is the second level of Donkey Kong Island in Donkey Kong Country: Tropical Freeze and its Nintendo Switch port. This level is reminiscent of the Beach levels of Donkey Kong Country Returns, but it is frozen over due to the invasion of the Snowmads on the island. The major obstacle in this level is the ice-cold water that makes swimming impossible: one heart of damage is dealt if contact is made with the water. In addition to icy platforms, which greatly reduce traction, the level also features many sinking ice structures and sunken ships. Many of these ships have levers that Donkey Kong can pull to raise the ships out of the water, allowing him to not only reach higher areas, but also gain access to the previously-sunken areas of the ships. The end of the level also features a rotating sequence of ship masts that move in and out of the water, and the enemies here increase the difficultly of avoiding the ice water. Common enemies in this level include Tucks, Tuff Tucks, Painguin Tucks, Big Sphens, Blue Hootzes, and Hot Hootzes.

The soundtrack for this level is titled "Seashore War". David Wise, long-time composer for several Donkey Kong games and the author of the aforementioned musical composition, once stated that it is "[his] favorite song [he's] composed", and that it was "[his] friend who played the guitar on it".[1]

The level begins on a solid, snow-covered structure, where a sign can be found that warns against swimming in the water. The platforms following here are all glaciers that sink when stood on. Through here, Donkey Kong and the others can find the letter K and a DK Barrel that can free Diddy Kong, Dixie Kong, or Cranky Kong. An Archy guards the letter K, while a row of Blue Hootzes fly between two platforms. The first sunken ship is ahead of here, and a lever on its right side can be used to lift it from the water and reveal a Puzzle Piece. This also allows the Kongs to reach a sloped platform and continue through the level. A Barrel Cannon leading to a Bonus Level is ahead of here, but it only appears if Donkey Kong pounds on a plant, which is guarded by a Big Sphen. The first checkpoint is located ahead, beyond more sinking platforms and Hootzes.

A long ship lies ahead of here, where the Kongs can find several more Hootzes, including four Blue Hootzes that circle the letter O. If the ship is lifted from the water, the Kongs also gain access to more bananas and Banana Bunches. Ahead, the next ship must be raised to reach a platform with a Big Sphen on it. This platform sinks into the water as its neighboring ship platform rises. On the platforms ahead of here, Donkey Kong can find a circle of bananas that must all be collected to spawn a Puzzle Piece. Beyond here, some large gaps must be crossed either by using swinging vines or by roll-jumping. The letter N is over one of these gaps, but it is also guarded by a Blue Hootz. Boom Birds throw Watermelon Fuse Bombs from the background as the Kongs progress through here. Soon, they reach a solid ship platform with a cracked block over an alcove. A Bonus Level can be accessed if the block is broken. The second checkpoint lies ahead. 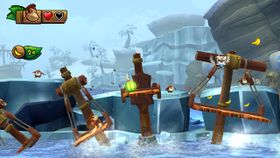 These mast platforms cycle in and out of the water.

Following the checkpoint, the Kongs reach a ceiling covered in climbable leaves. Two Blue Hootz here surround a large Banana Bunch and a sinking platform. The letter G is located on a ship nearby, but it is slightly submerged and can only be collected safely by lifting the ship with a nearby lever. A Hot Hootz is placed above here to shoot flames at Donkey Kong as he attempts to raise the ship. Raising the ship is also necessary to reaching a nearby Blast Barrel, which is connected to a mast across from another Blast Barrel and mast. The masts, along with the barrels, both sink into the water if the Kongs remain in the barrels for too long. Blue Hootzes and a few collectibles, such as a heart, circle the area between the barrels, so timing is important. The second Blast Barrel shoots to the next area, where Donkey Kong and his friends must use ship masts that rise and fall into the water as platforms. The masts move together as if they were connected on a wheel, meaning that, as they begin to emerge or sink, they are angled so that the Kongs can slide off of them. An additional danger in this area are the multitude of Hootzes and Boom Birds that attack as the Kongs make their way through. A checkpoint lies at the end of this area.

Ahead of here, Donkey Kong reaches a large platform with a ledge that can be passed by raising the platform from the water and traveling through the passage underneath. If he manages to reach the top of the ledge, he can find a Puzzle Piece in a plant. After passing a Big Sphen on the following platform, the Kongs come to raised, wooden structure with another Big Sphen attacking on it. They must progress quickly here, as the ice in the background falls into the foreground once they enter the area. Following here, they continue along more wooden platforms, which are surrounded by Hootzes, until they reach a Barrel Cannon. The barrel aims toward the Slot Machine Barrel, and they must shoot to it while watching for the pieces of ice that fall from the background. 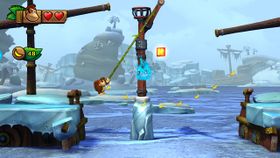