“Under the water is cool and all, but I still prefer up top on the rockin' rollin' waves!”
—Funky Kong, Donkey Kong Country: Tropical Freeze

Sea Breeze Cove is the fourth world and island in Donkey Kong Country: Tropical Freeze and its Nintendo Switch port of the same name. It is opened once the Kongs beat Ba-Boom in the previous world, Bright Savannah, and its boss is Fugu, the Frightening.

Despite its name, Sea Breeze Cove consists of an archipelago. Its levels either take place on coastal land above water, or start off on land but take place mainly underwater. Many aquatic enemies appear throughout the world, including first-time enemies such as Fritz and Mama Saw, which are based on real-life electric eels and sawfish, respectively. Squiddicus makes a comeback after Donkey Kong Country Returns, in a stage called Irate Eight.

Many large, dogū-like[1] statues are scattered throughout Sea Breeze Cove, forming the world's primary motif. Some of them lie on the beach sands in the background, while other are sunken underwater. In a level called Rockin' Relics, lightning electricity causes these statues to toss various objects in the air, such as platforms and obstacles. 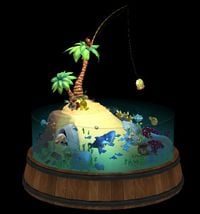 The following is extra content that can be unlocked in Sea Breeze Cove. The unlockables can be seen in their respective galleries after selecting the "EXTRAS" option. For a full list of extras in the game, see here.

A soundtrack selection for this world can be unlocked after beating Fugu, the Frightening.