Screaming Pillars are tall living pillar structures and members of the Tiki Tak Tribe, usually acting as obstacles. In most games, they are found asleep or overall inactive, until a certain action within their vicinity alerts them. Screaming Pillars startle very suddenly and might fall on the ground, crushing any creature lying underneath them and remaining completely inert afterwards.

Screaming Pillars resemble narrow stone totems, which display carved symbols. They are erected on semi-pyramidal stands, and feature cracks towards their bottom, pointing out their precarious state of standing upright. Their zigzag-shaped mouths, placed underneath two empty sockets which serve as eyes, are part of their facial features. A Screaming Pillar is adorned on each of its head's sides with feather tufts, which detach after the enemy has made a sudden movement.

In Donkey Kong Country Returns and its enhanced port, Screaming Pillars can be encountered throughout the Jungle, Ruins, and Volcano areas, and are initially seen idle. If the Kongs approach these pillars, they awake with a scream and collapse onto the ground, potentially crushing any creature standing beneath them, including the Kongs; their feathers also fall off during their sudden awakening. Should a pillar fall onto the Kongs, they lose one heart from their health counter. The Kongs can destroy a Screaming Pillar by ground pounding its feeble head after it fell on the ground. Sometimes, Screaming Pillars might give out precious items, such as Banana Coins or even Puzzle Pieces, after getting destroyed.

Noteworthy is that Screaming Pillars react to the Kongs at different ranges. Some of them only topple if the Kongs are within very close range, such as in Wonky Waterway, while others are able to locate the primates further and then fall, as seen in Damp Dungeon. A level called Five Monkey Trial contains several Screaming Pillars which collapse regardless of the Kongs' close presence, and also instantly break upon hitting the ground without the heroes' intervention.

An enormous variant is present in the levels Canopy Cannons and (exclusively to the Nintendo 3DS port) Crushin' Columns. Their scream is much louder and more intense, and they take out the Kongs completely when falling onto them. 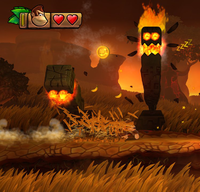 Screaming Pillars, now referred to as Flaming Falling Totem Poles in the Prima guide,[1] return in Donkey Kong Country: Tropical Freeze and its Nintendo Switch port. When awakened, they expel flames out of their eyes and mouth before falling to the ground. Like in the previous game, they are able to crush the Kongs as they fall, but can be destroyed with three Ground Pounds once they hit the ground. They only appear in Scorch 'n' Torch, where at one point a Flaming Falling Totem Pole falls on and crushes a stationary fire Archy, showing a capability to damage enemies as well as the Kongs. 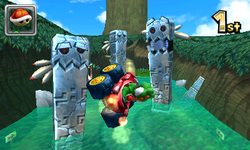 Screaming Pillars make a return in Mario Kart 7. However, they don't attack the player by collapsing on the ground, instead appearing as obstacles on the DK Jungle racetrack. While usually dormant, they scream every once in a while, powerfully blowing air to push hanggliding players back. Their appearance has been slightly updated with the addition of stone eyebrows.

Regular Screaming Pillars have been replaced with big variant in the Mario Kart 8 and Mario Kart 8 Deluxe rendition of DK Jungle. They exhale smoke while making noises.

In the E3 2013 trailer for Super Smash Bros. for Nintendo 3DS / Wii U, Screaming Pillars can be seen very briefly in the background when Donkey Kong is first seen. They also appear in the Wii U version of the game itself as stage hazards on the Jungle Hijinxs stage, where they can be toppled by the playable characters so as to potentially fall over rival fighters.