This article is about the race course from Mario Kart Wii. For Rainbow Road as a whole and other versions of the track, see Rainbow Road.

Rainbow Road is the fourth and last course of the Special Cup in Mario Kart Wii. The course takes place within the Earth's atmosphere and appears to be located over the eastern parts of North America, as well as some parts of Europe, Africa, and South America. If the player happens to fall off the course, they will burn up in the atmosphere, no matter if there is a section of the course below them, before getting picked up by Lakitu.

This course has a Super Mario Galaxy theme to it, featuring a Launch Star and floating Star Bits as elements of the track's design and theming. A large galaxy can be seen in the background, as well as sunlight on the Earth's surface. Both of the course's staff ghosts are driven with Rosalina.

The opening to the course's music is similar to the opening portion of Rainbow Road's music from Mario Kart DS. Later, it uses the Good Egg Galaxy theme as a countermelody underneath its own main melody. Also, a remix of this course's music appears as one of the selectable songs in Mario & Sonic at the Sochi 2014 Olympic Winter Games. 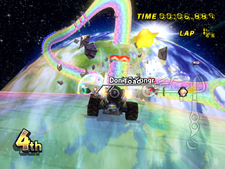 The downhill portion of the track

The course begins on a near 90 degree downward slope, located after the starting line. Light drivers may be easily punted off in this area, since there are no rails to help the racers from falling off. Three Dash Panels are present on this slope. One stretches across the road while the other two are spread apart from each other, with one on the right and one to the left further ahead. At the bottom of the downhill waits five Item Boxes, and a ramp with a Dash Panel on it. Vehicles can perform a trick here as they arrive on a new sloping road which takes a sharp left turn, but bear the risk of going too fast and falling off the right end of the track; especially so for racers with lower drift or handling stats.

After this sharp turn are three more Dash Panels that stretch across the road that lead into a left turn, with a half-pipe on the very right. The half-pipe allows racers to grab several floating Item Boxes, but not without risk, as racers who take the half-pipe at a certain angle and go too far into the air may actually shoot past the track's railings and fall into space. After the left turn is a slightly wavy road, where the player may perform tricks and grab airborne Item Boxes. Each lap, the road gets wavier, allowing for more tricks to be performed. At the end of this wavy segment is a ramp with a Dash Panel on it, which will send players into a figure-8 shaped section vaguely similar to one seen in Daisy Circuit, but with two large holes dividing the track instead of walls. Both holes have half-pipe ramps to their sides on the left and right ends of the track, with the first pair featuring more Item Boxes, and racers may perform tricks on small ramps that border the edge of the holes. Following this section is a sharp turn left, then a gentler curve right that has Item Boxes lying across the road. The left turn in particular can prove especially treacherous, as the railing from the previous section extends only partially over the road's right side; combined with the track's sloping angle, colliding with this rail at high speed can potentially bump a racer off the opposite side of the track. After the Item Boxes is a large Launch Star, which blasts the player upwards through a rainbow-colored tunnel onto the highest section of the track.

When the player lands after this, there is a very minor twist in the road, and then an upward curve covered in several Dash Panels, leading into a unique, mandatory half-pipe ramp that makes a broad left turn over a gap and through several star-filled rings, sending racers landing onto another section of the track. In this section, the road splits into two twisting paths with very little railings, with the right elevated higher and the left leading slightly downward - the two paths are roughly parallel, featuring a small Dash Panel on the inside of the road near their beginning, a turn in their opposite direction, and then a sharp turn back towards the middle with another optional Dash Panel at the inner edge of the track, finally culminating in a ramp with two wide Dash Panels and floating Item Boxes. Past this jump, the road merges once again into the track's final stretch: a long, sharp left upwards turn with no rails surrounded by a swirling tunnel of stars, with three Dash Panels placed alternatingly across the left and right sides of the road. All that waits before the finish line from here is a gentle right turn, after which the track loops over for another lap. It is the longest nitro course in the game.

Funky Kong flying over the slope

At the beginning, racers can use a mushroom or slipstream in conjunction with a jump to fly over the beginning downhill portion and land just before the ramp. With a drift-type vehicle, they can even cut off the first turn.

Players can jump over the two giant holes, either entirely or partially, with the aid of Mushrooms, trick boosts, or nothing at all. They can also hop over the curve following the giant holes with no items (although the boost from the 2nd right half-pipe ramp or 2nd hole can help).

On the half-pipe ramp following the Launch Star, racers (particularly those with bikes) can drift to the left on the ramp to spend less time in the air and land much sooner.

The November 2009 second tournament took place at Rainbow Road. Players had to race three laps, while avoiding Chain Chomps, which appear roaming, rolling, and even dropping from a higher section of the road onto a lower one in specific sections of the track. The players started the race with a set of Triple Mushrooms. This could be a reference to the Mario Kart 64 iteration of Rainbow Road, as Chomps were present there. The tournament was restricted to karts only. The official description stated, "Chain Chomps have taken over Rainbow Road in this karts-only Time Trial. Anticipating their movements and avoiding them is the key to a good score."