Peach Beach is the second race course of the Mushroom Cup in Mario Kart: Double Dash!!. It is Princess Peach's home track of the game. The beach is reminiscent of Gelato Beach and other areas from Super Mario Sunshine.

The race course starts out at a cobbled street that looks like Delfino Plaza next to the Grand Pianta Statue. When entering the beach in a Ricco Harbor-like area, the Daisy Cruiser can be seen in the background (though the cruise line ship is missing if the game is played via split-screen mode in Mario Kart: Double Dash!!), as well as the Sunshine docked in the harbor. Also, the Grand Pianta Statue fountain is replaced by a huge Power Star in Split-screen mode. While racing on the beach, wandering Cataquacks of four different colors charge at the racer if they go near them. The final stretch takes place on a path similar to those at Bianco Hills, and if the player turns left into the square where the fountain is right before the finish line, they find Item Boxes before a sharp turn back to the course. The course shares its music with Daisy Cruiser. The Award Ceremony at the end of every cup (including the All-Cup Tour) in Mario Kart: Double Dash!! is carried out here.

Peach Beach reappears in Mario Kart Wii as the first race of the Shell Cup. 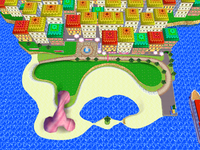 The racers first begin on the stoned straight road. Two Piantas and a Noki can be seen waving from the sidelines. After turning to the right of the first corner, the player can go to the left to find a ramp with Dash Panels and get an Item Box there. If the player takes an early left they will be shot out of a pipe and receive a Double Item Box. However, this pipe does not appear in Mario Kart Wii. After jumping over the ramp, the racer lands on a small piece of land with a palm tree and grass surrounded by water. If the tide is high, the water greatly slows down the vehicle crossing this zone. However, if the tide is low, the player can travel across without problems. Computer-controlled players never take this path. The darker patches of water represent deeper areas that act like pits.

On the right path, Cataquacks appear roaming in the shore, but only in Grand Prix and VS races. They flip any vehicle in the air by contact and also take away some items on hand. While there is high tide, racers must follow the curved path, but by using a speed power-up, it is possible to take a shortcut over the water. During the low tide, racers can cut the path going straight to the next turn.

Racers then turn to the right below a pink natural arch where a set of item boxes lie in. After the arch, a pair of Cataquacks appear wandering another piece of the shore that leads to the right at the end.

After turning right, the beach ends in the cobbled road that leads straight to the finish line. Just before the line, there is another set of moving item boxes sliding left and right plus an alternate way to the left of the road that surrounds the fountain with a pair of Item Boxes behind. This way, however, is not a shortcut.

Peach Beach reappears in Mario Kart Wii as the first course of the Shell Cup, where it has received a few changes. Hammer Bros., Toads, Goombas, and Shy Guys can be seen on the deck of the Sunshine cheering (only in single player mode), and there are more umbrellas over the spectators on land. The biggest difference is that the pipe with the double items in Mario Kart: Double Dash!! is no longer present in Mario Kart Wii. Another difference is the boost ramp and item boxes in the area behind the colored crates at the end of the dock. The Cataquacks still appear, though the blue one wandering around the first tidal area was replaced with another green one. They also appear in Time Trials, though they do not target the player. There are also more Piantas in the audience, and the course's map has been changed. Computer players may also now take the left path of the beach.

There is a glitch just before the finish line where the player has to use a Mushroom to clip a tree to the right of the track. The player can then land on the beach below and skip lots of the course.