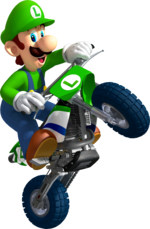 Luigi performing a wheelie on his Standard Bike

A wheelie is a technique that can be used only on a bike in Mario Kart Wii. Wheelies slightly increase the speed of the player's bike, but if they bump into an object or opponent while performing one, it cancels and the player loses speed. The player also drops any items deployed out. Also, the speed increase comes at the cost of reduced handling, and turning while performing a wheelie slows down the player substantially. Wheelies fail if the player tries to perform one without moving, or if they are moving too slowly.

In Mario Kart 8 and Mario Kart 8 Deluxe, wheelies have been removed altogether, and they cannot be performed by the player at will. However, during certain boosts, racers who are riding bikes perform a purely cosmetic wheelie.

Depending on the player's controller, a wheelie is activated accordingly:

To stop a wheelie:

In addition, drifting cancels a wheelie.