The original Rainbow Road debuted in Super Mario Kart, as the fifth and last course of the Special Cup, starting the Mario Kart series tradition of having Rainbow Road as the finale of the game. It is the shortest Rainbow Road in the series.

This course is unique in Super Mario Kart in the fact that it is the only track in the game that is not numbered compared to the others, and thus it is the game's only unique track. It is the only track in the Special Cup with normal traction, but lacks rails entirely and has only 90-degree turns. Rainbow-colored tiles and a few jumping bumps cover the track's surface, and the yellow tiles conceal coins. This course features Star Thwomps which can wipe out a racer by touch, unlike regular Thwomps, as well as by crushing, unless the racer uses a Super Star or a Boo.

In Mario Kart: Super Circuit, the Rainbow Road theme in that game uses a part of this course's music. Super Mario Kart composer Soyo Oka also considers this course's theme to be one of her favorite compositions.[2] 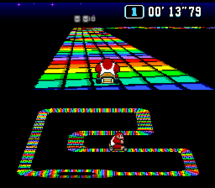 The track begins with racers taking a turn to the right, where they will find ? Panels to gather items. There are some Jumps, followed by four Thwomps. After this, racers turn to the right again where they can collect some coins, followed by another turn to the right, where there is once again a path with jumping bumps with an incoming turn that might cause racers to fall. After this turn, the track gets narrower and follows a long path where more coins and Thwomps are found along the way with another turn awaiting the player. It is here where the track gets even more narrow increasing the risk of falling. Before the final turn, the track splits into two roads; the left side contains coins while the right side has two ? Panels, both have a pair of Thwomps near the part where these roads merge. Alternatively, there are two jumping bumps in the middle gap; if any racers use a Mushroom while they are heading for them, they can jump over the gap for a significant shortcut. After the final turn, before the finish line, there is another quartet of Thwomps, but this time there is no space between them to pass, with players only being able to pass them by driving on the side or when the Thwomps are rising.

Luigi racing through the track

This version of Rainbow Road reappears in Mario Kart: Super Circuit as the last track of the Extra Special Cup. The background is from that game's own Rainbow Road, but with only the sparkles, foreground clouds, and moon appearing; like that track, this one is also translucent. The Thwomps and jumping bumps are removed. The coins' placement is also changed so that all coins are on blue tiles, making it much easier for players to collect them. 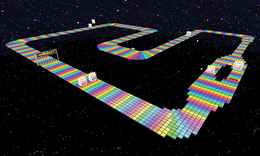 Overview of the track in Mario Kart 7

The course uses a similar background to that of DS Waluigi Pinball. Unlike previous incarnations, this new version has the characteristic "glistening" sound effect when drifting on it, a common feature of all Rainbow Roads starting from the GCN rendition. The Thwomps (now with their New Super Mario Bros. Wii appearance) return. They are now larger, and their numbers in the track are reduced from sixteen to seven, and now form ripples on the track upon impact, which the player can trick off of. Also, howling noises can be heard near the Super Thwomps.

The tiles' colors are similar to those of Rainbow Road from Mario Kart: Super Circuit, with pink replacing the red tiles and cyan replacing the teal tiles. In first-person view, the player can see through the breaks in the tiles. The widest part of the gap in the forked road is two tiles shorter, but the gap itself is also seven tiles shorter, making the shortcut easier to use. Also, the section of tiles before the fork (from the orange tiles on the narrow part of the straight after turn 7 to the purple tiles before the gap) is wider: the first orange, blue, yellow, and last purple tile rows before the gap are now two tiles wider. The finish line is also two tiles long, removing the red tiles that used to be in front of it.

Ramps replace the yellow bumps, though the first two bumps were removed entirely, the last pair at the fork is now a single taller ramp in front of the gap, and a ramp was added on the inside of the second U-turn, adding a new shortcut (requiring a Mushroom or Mini-Turbo to get across); the ramps are only two tiles wide, rather than three, like the bumps. Like most other SNES and GBA classic courses, a starting banner stylized after the one from Mario Kart 64 is added in this course.

Aside from enhanced percussion, the music remains faithful to the SNES version. 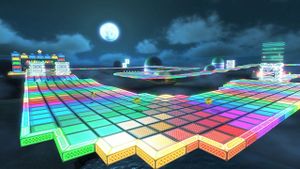 Overview of the track in Mario Kart 8

The track's layout is similar to its appearance in Mario Kart 7. The tiles revert to their original colors, though their color pattern is reversed, and they are now flashing LED lights, like on N64 Rainbow Road. There are now eight different colors of tiles, instead of seven from its previous appearances (adding cyan between teal and blue), and the tiles the Thwomps land on are now white. The course itself is also larger, wider and banked (namely, the inclined third U-turn). Tiles at the edges of the track now have borders on the outer edges. The forked road is also altered further, with the narrow part of the hole's end filled in, and the ramp in front reverted to the original bumps' height and position. The music is also deeper-pitched and remixed, as with the other classic courses in this game.

The Thwomps work as they do in Mario Kart 7, but they now have sparkles, a mosaic-like appearance, horizontal rainbow lines running from bottom to top of them, and the species' Super Mario Galaxy appearance, like the other Thwomps in Mario Kart 7 and Mario Kart 8, rather than their spiked New Super Mario Bros. Wii design in Mario Kart 7. Additionally, all of the Thwomps are bigger except the last two. Unlike before, when they start to crash down, they will create rainbow waves above them. Also, when they shake before falling, and the moment they land, they make metallic glistening sounds. The waves on the track they create are now bigger, move more quickly, and disappear faster than in Mario Kart 7, making tricks more difficult to perform.

The course as seen at the starting line

The course now takes place in a cloudy night sky with the full moon visible, just like in Mario Kart: Super Circuit, but it now has color-changing hills that stick above them. Various Toad Houses litter the landscape below the course, which in itself is similar to SNES Donut Plains 3. The starting banner is now redesigned, with colored blocks with a Star on top of it and the Mario Kart logo's letters now individually colored (red, green, yellow, and blue) instead of having a rainbow gradient through the entire logo; the banner also stands on two walled areas, now making the start the only walled part of the course. Also, when a player approaches a turn, two green arrow holograms will appear behind the turn, and indicate in which direction the player must drive. Once the player has made the turn, the arrows will disappear. 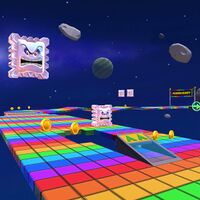 This version of Rainbow Road reappears in Mario Kart Tour starting with the Tokyo Tour. It mostly takes on the appearance of its Mario Kart 7 iteration, including its starting banner. However, the ramp inside the second U-turn is absent (as in the original and GBA versions), the hole in the road is even smaller than it was before (the narrow part at the end is only one tile long, and the hole in general is 7 tiles shorter), the last two Thwomps are further apart, the red tiling on the course and banner returns (in place of the pink ones in Mario Kart 7), the track edges are rounded, the track itself is thicker, and the arrow signs and Thwomp designs from the Mario Kart 8 rendition return. This course is a favorite of Rosalina, Metal Mario, Pauline (Party Time), Ice Mario, Peach (Wedding), Luigi (Painter), Tanooki Rosalina, Yoshi (Gold Egg), and the Birdo Mii Racing Suit. It can also be a favorite of Pink Toad (Pit Crew) and Dry Bones (Gold) if they reach level 3 and Peach (Kimono) if she reaches level 6. Rainbow Road reuses the arrangement heard in Mario Kart 7, while other classic courses retain their original music.

Like all other courses, Rainbow Road features a reverse variant and trick variant of the course, referred to as Rainbow Road R and Rainbow Road T respectively; a reverse/trick variant, Rainbow Road R/T, was later added in the 2019 Winter Tour. The R variant includes a Glide Ramp going over a large gap, with star-shaped sets of coins appearing. The T variant removes the Star Thwomps, but the sections that they appear in still wave. The R/T variant features Star Rings, and a Mushroom Trampoline.

If the beta test is included, this course is the first, and currently only, course to appear as a Coin Rush course four separate times. 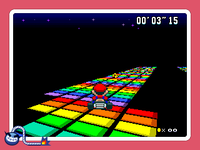 In WarioWare Gold, Rainbow Road appears as the setting of the Super Mario Kart microgame.

"I love this tune, so I was really nervous when rearranging, as I didn't want to spoil it. This is the third time this has appeared as a classic course, so I wanted to make it as bright and sparkly as possible. I went all-out and used a cutting edge digital synth sound."