Rock Rock Mountain (known as Alpine Pass in the British English version) is the fourth and last race course of the Flower Cup in Mario Kart 7. It takes place on a mountain with pipes and a forest. A part of this course's music rearranges the title theme from the NES game Mach Rider, while a rearrangement of the game's main menu theme can be heard right before the song loops.

Along with Cheep Cheep Lagoon and DK Jungle, this course was playable in demo versions of Mario Kart 7.

Rock Rock Mountain returns in Mario Kart Tour, debuting in the New York Tour, and in Mario Kart 8 Deluxe as the third course of the Rock Cup in the Booster Course Pass.

The track starts on a curvy cliff road on the side of a mountain, with a trick ramp nestled along the edge right before the second turn. The road leads to a cave in the mountain with Swoops flying and columns blocking the way. After exiting the cave there is a sharp downhill bridge ending in a Glide Ramp through a valley. Pipes serve as obstacles that must be dodged while gliding down. One of the pipes blows air, starting in the second lap. Racers land in the forest, driving through trees and felled trunks before entering a second, but smaller, gliding section. The road then turns to the right, and into a steep uphill climb up the mountain past rolling rocks and Dash Panels. At the top of the mountain is a glider ramp, leading to the finish line.

If the player goes to the right side of the forest after the second glider section, they will find a tree without leaves, possibly a mistake by the developers. There are a few more trees without leaves to the left at the end of the forest; all but one of the trees are shown with leaves on the map.

When racing online, only one of the pipes blows air on the third lap, and the second coin ring in the air is removed.

After the second glider it is possible to cut through the grass only with one mushroom, and the first turn is cuttable with the Peach Parasol or the Flower Glider, as they can rise higher in the air. On time trials it is also possible to use a mushroom in the air to skip the windy cliffs at the start. 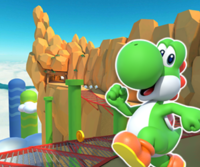 The course icon with Yoshi in Mario Kart Tour

Rock Rock Mountain reappears in Mario Kart Tour, starting with the New York Tour. Rock Rock Mountain is the only Mario Kart 7 course introduced in the New York Tour to not be from that game's Mushroom Cup. Here, the course received some changes. The mountain is now a tan color, instead of a dark gray. The banner for the starting line has also been changed, and now includes two log supports holding it up, instead of poles. Furthermore, the sign itself now features black and white checkers, rather than the turquoise and light yellow checkers from before. The ramp inside the second turn was removed. The glide ramp after the cave now resembles the trick variation ramps. This course is a favorite of Yoshi, Donkey Kong, Waluigi, Light-blue Shy Guy, Yoshi (Reindeer), Toadette (Explorer), Mario (Aviator), Wario (Hiker), and Meowser. It is also a favorite of Mario (Happi) if he reaches level 3 and Penguin Luigi if he reaches level 6.

As with each course in the game, Rock Rock Mountain has a reverse variant and a trick variant, known as Rock Rock Mountain R and Rock Rock Mountain T respectively. The trick version of Rock Rock Mountain is one of four courses in Mario Kart Tour that does not start in the same place as the original, the others being 3DS Rainbow Road T and R/T, and Singapore Speedway R/T. In this case, the starting line is now midway through the forest after the first Glide Ramp.

It is the only course among those that have appeared since launch and also currently the only 3DS course that has yet to receive an R/T variation. 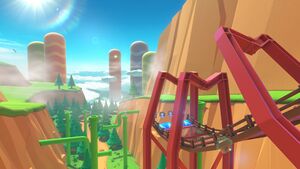 Rock Rock Mountain returns again in Mario Kart 8 Deluxe as part of the Booster Course Pass downloadable content. It appears as the third course of the Rock Cup, and as such was added in the third wave of the pass. It is based on its design from Mario Kart Tour, only with numerous visual upgrades. The big slope at the end of the track now uses anti-gravity, with Spin Boost Pillars replacing some of the Dash Panels. Due to the different physics of the glider in this game, the first fallen tree can no longer be reached and tricked off of, and thus houses some spectators, though the second one is still accessible. Additionally, more of the pipes blow air in both the beginning cliffside section and the valley section, with some only activating as the race progresses. The final lap version of the music no longer features a unique intro.

This is one of five courses in Mario Kart 8 Deluxe where players can hit the banner (causing it to spin), like Mario Circuit, DS Wario Stadium, 3DS Neo Bowser City and Tour Tokyo Blur. It is also the only course with this criteria that is not the first course of its cup.

Rock Rock Mountain is one of two courses to originate from Mario Kart 7 to appear in the third wave of the DLC, alongside 3DS Rainbow Road. Since Mario Kart 8 Deluxe supports British English, unlike Mario Kart Tour, this course is once again referred to as "Alpine Pass" when the Nintendo Switch console region is set to Europe or Australia/New Zealand, making it the only course in the Booster Course Pass so far to have a different English name.