The race starts out on a straight road that eventually leads to a curve to the right. The curve also features a twisty road and a row of Item Boxes for players to use. After the curve and the twist, the road continues curving until a U-turn leads players into a longer straight road. This straight road leads to an overhang, where players originally started.

Past the overhang, another curve to the left takes players to the bottom left part of the course, where the road is somewhat straight, but not as straight as the preceding road. Players then turn left, pass a row of item boxes, and drive over a small hill that makes players fly. After the small hill, there is a somewhat sharp curve to the left. In the 50cc races and the Time Trials mode, banisters are set to prevent players from falling into the water below. However, the banisters are not present in the 100cc, 150cc, and EXTRA modes. Boulders fly out on the sharp curve to flatten and slow down any player that is present in their landing spot. There is a body of water present on the other side of the curve that the boulders fall into.

After the falling boulders, a right curve takes players to a straight road, with the road below them to the left. If players fall into the road below, they must race the part they were just in, also with the penalty of losing any position if players are behind them. After this dangerous place is a curve to the left, with three sets of hills that also send players flying into the finish line, where they start the track again. 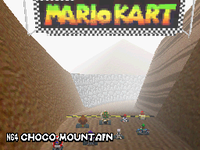 Choco Mountain returns in Mario Kart DS as the second course of the Leaf Cup. Not many changes were made, aside from the graphics, and the banister that protects the player in Mario Kart 64 in 50cc and Time Trials was removed completely. The course was available in Wi-Fi. In Mission 4-6, Donkey Kong has to destroy 10 Item Boxes while avoiding the fake ones.

Choco Mountain reappears once more in Mario Kart Tour, where it makes its debut in the 2020 Exploration Tour. The starting banner has been changed to a wooden sign with a blue, three-dimensional Mario Kart logo, and more signs were added to the track. There is now a scarce amount of foliage on the borders of the road. A pit and some dead trees have been added at the left of the first turn and some small ramps were added just before the face of the mountain. After entering through the mountain, the track now has a cavern section with Swoops, crystals and off-road shortcuts. A Glide Ramp with a pit below and on the right has been added at the end of the cavern. A concrete wall and Fish Bone fossils were added in the part with the boulders. The banister that was originally present in Mario Kart 64 in 50cc and Time Trials reappears in all difficulty levels, but only from the curve right after the boulders. The last turn now has a off-road part that the players can use as a shortcut. The player can now perform a Jump Boost by hitting the broken bridge.

Like Donut Plains 1, Koopa Troopa Beach 2, and Frappe Snowland, it retains its original music, rather than using the Mario Kart DS arrangement.

Choco Mountain returns as the third course of the Golden Dash Cup in the Booster Course Pass DLC for Mario Kart 8 Deluxe. It is heavily patterned after its appearance in Mario Kart Tour, though with updated graphics. The ramps before the cavern section have been removed, as was the ability to trick off the broken bridge. The track also receives a Western-inspired arrangement with harmonica, fiddle, banjo, and electric guitar.[2] Koopa Paratroopas and Shy Guys have been added as spectators on the course.

As with all other courses from Wave 1, this course's icon and lighting were adjusted slightly in the 2.1.0 update. Prior to the aforementioned update, the wheels on the karts did not build up dirt despite the fact that Choco Mountain is a dirt-based track.