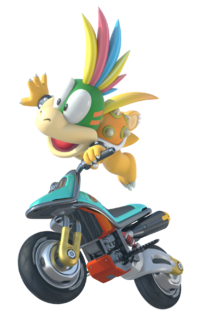 Lemmy on his Standard Bike

Due to their ability to drift, they in general handle in a similar way to karts since their introduction in Mario Kart Wii. In both Mario Kart Wii and Mario Kart 8, they can be distinguished from sport bikes by looking at the usually more upright posture of the character riding them. 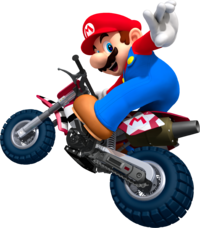 Mario performing a trick while riding his Standard Bike

Standard bikes are introduced as drift type (「ドリフトタイプ」) bikes in Mario Kart Wii.[2] They are not explicitly distinguished from sport bikes in the vehicle selection screen and as such, the player needs to look at the posture of the rider to understand whether the selected bike is a standard bike or a sport bike. All the chopper bikes (Wario Bike, Shooting Star, and Phantom) drift out while performing a manual drift, so they're categorized under the standard bike vehicle class.

Yoshi drifting on his Standard Bike

The main distinguishing feature of standard bikes is their ability to drift like karts, unlike karts however as soon as they start drifting after landing from a jump they quickly slide toward the outside of the turn for a brief moment, leading to slightly different lines. Furthermore, their turning capability (angular velocity) while drifting is in general significantly lower than that of karts.

Like all the other bikes in the game, they are unable to charge Super Mini-Turbos, but the rider is able to perform wheelies on the player's input to temporarily increase their top speed. 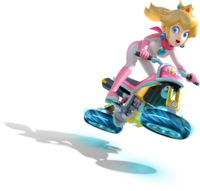 Standard bikes return as one of the four body classes of Mario Kart 8, alongside karts, sport bikes, and ATVs. In this game, they are given a proper name,[1] and are fully distinguished from sport bikes in that they have their own distinct icon on the vehicle customization screen (

Larry drifting on his Mr. Scooty

Names in parenthesis are the names used in the British English version.