Not to be confused with Coliseum. 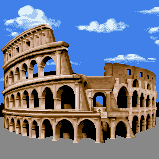 The Colosseum in the SNES version

The Colosseum in the DOS version

“The Colosseum was built in AD 72 at the command of an important Roman Emperor. Its name comes from a Latin word meaning big, and it really is huge. 573 yards in circumference, the Colosseum seated over 50,000 spectators. The rulers and the public came to the arena each week to watch games of strength and other entertainment. The games they watched were often very violent, with gladiators sent to fight riveting foes like hungry lions and elephants.”
—Pamphlet, Mario is Missing!

The Colosseum (in Italian: Colosseo) is a famous arena in Rome, built in 72 AD. During the time of the Roman Empire, it was the venue of gladiator fights. The Colosseum appears in all versions of Mario is Missing! as one of the landmarks that Luigi has to visit in Rome. It is closed because Koopa Troopas stole a gladiator's spear, and it can only reopen if Luigi returns it (though he is first asked some questions at the information booth, seen below). When Luigi returns it to the Colosseum, he is awarded $2000.