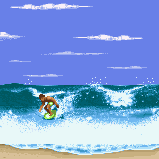 Luigi's photograph of a surfer on Bondi Beach

Bondi Beach is a popular beach near Sydney, Australia. According to a scientist whom Luigi met in the city during the events of Mario is Missing!, it encompasses an area of 7,000 square meters, and it is especially popular among surfers. During the events of the game, a surfboard from Bondi Beach is missing, stolen by Koopa Troopas. If Luigi manages to return the surfboard to the beach, he is rewarded with 1,260 dollars.

Australia, because it is both a continent and a country, has thousands of kilometers of coastline. Two of the most popular beaches near Sydney are famous around the world. Both Manly and Bondi beaches are popular as great surfing beaches, but Bondi is perhaps the better of the two. Thousands of beach enthusiasts gather at Bondi every year to watch the Australian Surfing Championships.