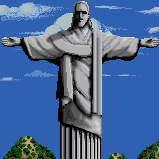 Luigi's photograph of the Christ the Redeemer Statue

The Christ the Redeemer Statue (Portuguese: Cristo Redentor) is a statue of Jesus Christ in Rio de Janeiro. Standing on top of Corcovado mountain and often being surrounded by fog, there are spotlights illuminating the statue so it can be seen from every point in the city. One such spotlight from Christ the Redeemer Statue was stolen by Koopa Troopas during the events of the game Mario is Missing! Luigi had to travel to Rio and find and return the artifact. His reward was a prize of 1,200 dollars plus a bonus of 2,100 dollars if he returns it first.

The statue also makes a cameo in both versions of Mario & Sonic at the Rio 2016 Olympic Games.

Standing at the top of the 2,037 foot peak of Corcovado, the statue of Christ the redeemer holds out his arms as if to embrace the city of Rio de Janeiro. The concrete image of Jesus Christ weighs 700 tons. In 1931 most of Rio's churches pooled their collected money and erected the statue on top of the mountain. The top of the mountain is often in fog, but the huge spotlights keep the figure visible from every corner of the city.