The Golden Gate Bridge in the DOS version 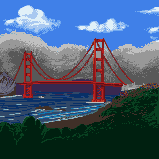 The Golden Gate Bridge in the SNES version

“Although more of an orange color than its name suggests, the Golden Gate might be the world's most famous bridge. It was built in 1937 and it took over 4 years to complete. It is 4200 feet long. The main cables are 36.5 inches in diameter and were designed to withstand winds of up to 100 miles per hour. Because the Golden Gate Bridge is covered in fog on most days, it is equipped with enormous fog horns. In the very middle, the bridge is 260 feet above the bay, just tall enough for Navy battleships to pass underneath on their way to the open ocean.”
—Pamphlet, Mario is Missing!

The Golden Gate Bridge is a famous bridge found in San Francisco, United States of America, connecting the city to Marin County. It appears in all versions of Mario is Missing!, in which one of its fog horns has been stolen by Koopas, causing the entire bridge to shut down. Luigi's task is to find the horn and return it to the bridge, which he eventually does, opening the bridge once more. He is also required to prove that the fog horn in his possession is genuine, which he does through the following questions: