The Temple of Heaven in the DOS version 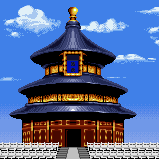 The Temple of Heaven in the SNES version

“Tian Tan, the Temple of Heaven, is China's most famous temple. It consists of several buildings, built around the 15th century, all set inside a walled park. The Hall of Good Harvest, the most well known of the park's buildings, is set on top of a triple tier of marble terraces. Each carved terrace has its own balcony. The 123 foot high structure is amazing because it was built without one single nail. The Emperor of China would spend one evening a year in the Temple, fasting and praying, to assure a good harvest for China's many farmers.”
—Pamphlet, Mario is Missing!

The Temple of Heaven (in Chinese: 天壇; Pinyin: Tiāntán) is a famous temple in Beijing, built in the 15th century. It consists of several buildings, the most well known of which is the Hall of Good Harvest, a round, wooden building. The Temple appears in Mario is Missing! as one of the landmarks that Luigi has to visit in Beijing. It has been closed down due to Koopa Troopas having stolen the Hall of Good Harvest, and it cannot reopen before Luigi returns them. After bringing the hall to the temple's information booth, he must prove that the building that he is holding is genuine before it can be reopened, leading to him answering some questions seen below: