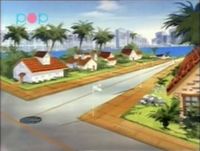 Miami is a city in the Real World, and it is located in Florida in the United States of America.