The episode begins in the living room of a Brooklyn home, where the mom and dad, who are getting ready to go out for the night, are waiting for a babysitter to arrive to look after their bratty son, Junior, who foolishly breaks two vases and lets the family cat take the blame.

At that moment, Mario and Luigi come out of a Warp Pipe underneath the kitchen sink and realize that they must have taken the wrong pipe. When Mario looks out the window, he sees the Brooklyn Bridge in the background, and realizes where they now are.

Mario and Luigi are then spotted by the mom, who assumes that they are Junior's babysitters. Mario and Luigi are unable to talk their way out of babysitting Junior and the parents, who are desperate to get going, hire the pair on the spot. They ask that Junior take a bath before they return. As soon as the parents leave, Junior asks if they can play hide and seek. The Mario brothers barely agree when Junior says they are "it". 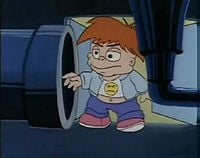 Junior crawling under the sink.

Junior goes to hide under the sink and crawls into the Warp Pipe, which warps him to the Mushroom Kingdom, where he takes an instant liking to the bizarre atmosphere of the place. Several Boomerang Bros. attack Junior with a boomerang, but Junior manages to catch it, throw it, and slice a tree in half with it, which crushes the attackers. Junior is then spotted by Kooky von Koopa, Bully Koopa, and Cheatsy Koopa. When they learn Junior was hiding from the Mario brothers, they convince him that they are his friends, since they are all enemies of the Mario brothers.

Mario and Luigi arrive in the Mushroom Kingdom to look for Junior and hear him calling for help. They see Junior riding piggyback on Bully's back and assume the Koopas have abducted him, although it was just a ploy to lead them to some attacking Ptooies, which they have to fight off. 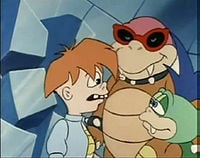 Junior asking the Koopalings if their plot is just for fun.

The Koopalings use Junior to lure Mario and Luigi inside a volcano, where they trap them behind rocks and boulders in a cave. However, Junior starts to worry when Kooky prepares to flood the cave with lava using a special pump, as he just wanted to play around with the Mario Bros., not to actually harm them. Annoyed with Junior's complaining, the Koopalings toss him down a pipe, warping him to the Pipe Maze.

Stranded in the Pipe Maze, Junior soon finds himself having to avoid Thwomps, Boo Diddlies, and a Boom Boom. Now that he is lost, Junior is desperate to return home. 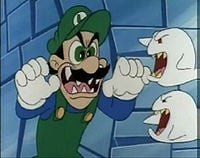 Meanwhile, Mario and Luigi escape from the rising lava by chiseling away at the wall. They then flee the volcano and spy upon the Koopalings laughing about what they just did. Mario realizes that Junior was used by the Koopas. The Bros. warp to the Pipe Maze, and deal with the enemies by dodging the Thwomps and stomping on the Boom Boom. Luigi then startles the Boo Diddlies by making a surprisingly scary face at them.

Meanwhile, Kooky starts to flood the Pipe Maze with lava, forcing the Mario Bros. and Junior to flee. Mario and Luigi both find Super Leaves, transforming them into Raccoon Mario and Raccoon Luigi. They then grab ahold of Junior and fly into a Warp Pipe to escape from the lava, returning to the Mushroom Kingdom.

Mario points out that the volcano is about to erupt, so he, Luigi, and Junior set up a boulder on a makeshift catapult out of a tree. They then use the catapult to launch the boulder at the volcano's summit to plug it, stopping the lava. 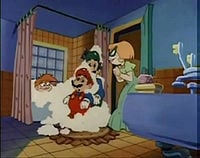 Junior's mom is so pleased that Mario and Luigi managed to get Junior to take a bath, that she asks them if they had be willing to babysit the following Friday. Junior is pleased with this, but Mario and Luigi are less than enthusiastic.