Giant Land[1][2] (alternatively Big Island,[3] the Land Of The Giants,[4] the Giant World,[5] or the Land of Giants[6]) is the fourth world of Super Mario Bros. 3. This world contains six levels, three Sledge Brothers, two fortresses, two Spade Panels, four Toad Houses, and a castle that has been taken over by an airship. Everything in this world is huge, including the ? Blocks and Goombas, and the map itself resembles a giant turtle, hence the name. Power-ups, Cheep-Cheeps, Spinies, Buzzy Beetles, Venus Fire Traps, and Bullet Bills are exceptions to this and thus remain in their original size.

The Koopaling in charge of Giant Land is the comparatively-small Iggy Koopa. The real king of Giant Land is a shirtless man with a turban on his head. During the events of the game, he gets turned into a dinosaur by the Koopalings; the SNES and Game Boy Advance versions of Super Mario Bros. 3 see him get turned into Donkey Kong Jr.

The map in Super Mario Advance 4: Super Mario Bros. 3 shows that it is to the east of Water Land and to the west of Sky Land.

In The Adventures of Super Mario Bros. 3, Prince Hugo is depicted as the most recent ruler, likely replacing the one seen in the game. Madzilla also lives here.

The sky is light green in the NES version of this world's overworld levels. 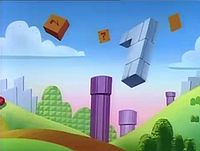 Giant Land in The Adventures of Super Mario Bros. 3.

Giant Land appeared in two episodes of The Adventures of Super Mario Bros. 3, and was mentioned in two others. It was shown to be similar to the game in appearance, with oversized blocks and pipes. However, the citizens of Giant Land were shown to be actual giants. Giant Land is ruled by Prince Hugo the Huge, who was stated to be the "new ruler" by Big Mouth Koopa.

Sneaky Lying Cheating Giant Ninja Koopas: This is the only episode in which this world is shown as the title card. Bowser wants to take over Giant Land, so he transforms Bully, Big Mouth, Cheatsy, and Kooky into Sneaky Lying Cheating Giant Ninja Koopas, enabling to storm through Giant Land and capture Prince Hugo the Huge. Mario and his friends show up at Prince Hugo's castle to offer their help, but the Royal Parrot dismisses them due to their small size. Mario and Luigi explore Giant Land to find a Super Leaf, evading an Angry Sun in the process. As Raccoon Mario and Raccoon Luigi, the brothers head back to the castle, but are unable to stop the Koopalings. They both lose their Raccoon Power and Luigi gets captured, along with Princess Toadstool, Toad and Prince Hugo. Mario manages to avoid capture by flying away on the Royal Parrot, whose cage was stolen by the Koopalings to house Princess Toadstool, Toad and Luigi during their capture. He later rescues Prince Hugo and his friends from Kastle Koopa.

Princess Toadstool for President: Although Giant Land does not appear, Bowser and Cheatsy unleash a pack of hungry Giant Land Paragoombas upon a crop in the Mushroom Kingdom, but Mario and Luigi show up and defeat them.

Dadzilla: Once Madzilla is freed from Big Mouth and Kootie Pie, after Princess Toadstool says that they will take him to enjoy a new life in the Mushroom Kingdom, Toad tells him that he would fit right in Giant Land.

Do the Koopa: When Bowser is using the Doom Dancer Music Box to make everyone in the Mushroom Kingdom dance endlessly, it appears that several citizens of Giant Land can be seen dancing around at one point.