Fortress 2 is the ninth overall and second fortress level of Water Land in Super Mario Bros. 3. This level can be played after completing World 3-7, and beating this level unlocks World 3-8. 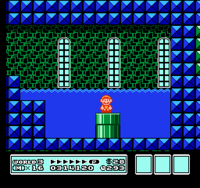 This level spawns Mario on a platform next to water and a Warp Pipe at the bottom of the water. This Warp Pipe leads Mario to a submerged area. Mario must swim past a Roto-Disc and two Cheep-Cheeps. A power-up holding ? Block lies between the two Cheep-Cheeps; it is the only one in the entire level. Past the ? Block and the second Cheep-Cheep is another Roto-Disc and another Warp Pipe. Between the Roto-Disc and the Warp Pipe is another Cheep-Cheep, which forces Mario to swim as high or as low to the ground as possible in order to successfully dodge the Roto-Disc and Cheep-Cheep. The Warp Pipe leads Mario to the third area of the fortress, which is also submerged. Mario encounters two Stretches, marking the enemy's first appearance in the Mario franchise. He must swim above, below, or in between the two Stretches to another series of Stretches. This area contains three more Stretches. Past these enemies is the final Warp Pipe which takes Mario to Boom Boom's arena.