World 1-2 is the second level of Grass Land in Super Mario Bros. 3 and the second overall in the game. Clearing this level gives access to World 1-3, World 1-4, and World 1- 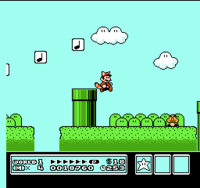 The player starts off at the bottom of a hill, which has a sideways Goomba-spawning pipe at the top. On the other side of the hill is a ? Block which holds a Super Leaf. Using the ? Block as a platform, the player can jump over the "T"-forming tall pipes, the top one of which also spawns Goombas. At the bottom of the next hill are a collection of coins, and a Switch Block in a Brick Block below the floating Warp Pipe, which the player can activate to change the coins into bricks to reach the floating pipe and enter a secret room. After jumping up a tall hill, the player will find Jump Blocks, one of which holds a Super Leaf. Afterward are some pipes with Venus Fire Traps in them, and some Jump Blocks that can help the player get across the pit, the last of which holds a Starman. After the next sideways Goomba-spawning pipe is a Para-Goomba and the goal.

By utilizing the Goomba-spawning pipes in the level, alongside Raccoon Mario's gliding to jump from Goomba to Goomba, the player can rack up an extraordinary number of lives.