World 3-6 is the sixth normal level, and the seventh level overall in Water Land from Super Mario Bros. 3. It is unlocked by clearing World 3-4 or World 3-5, and its own completion unlocks World 3-7 (as well as World 3-8, but only if the drawbridge between the two levels is lowered). 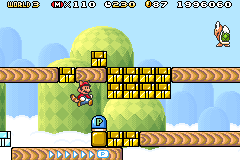 Mario about to activate a P Switch