Airship is the ninth and final level of Desert Land in Super Mario Bros. 3, which is unlocked by clearing World 2- 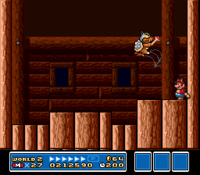 The player starts at the bow of the ship, after being told by Toad to recover the King's Magic wand. This airship is broken up in several places and has many Turtle Cannons firing Bullet Bills, turrets firing Cannonballs, and Rocky Wrenches placed within the ship near the end of the level. About halfway through is the only power up in the level, and afterward are several semisolid crate platforms the player has to use to get around a tall post, with this area being lined with Turtle Cannons. Entering the silver Warp Pipe at the end of the level will take the player to Morton Koopa Jr.'s chamber. Compared to Larry Koopa in the previous airship level, Morton Koopa Jr. is slower, but he fires his wand more frequently. Defeating Morton by jumping on his head three times will have him relinquish the wand, restore the King back to normal, and allow the player to move on to Water Land.