It's a Shoe-In is the sixteenth e-Reader level of Super Mario Advance 4: Super Mario Bros. 3. This card was released in Series 2 in Japan. Its official difficulty rating is ★★★☆☆. It was originally exclusive to Japan, but it became available internationally when the game was released on the Wii U Virtual Console in 2016. The key art featured Lemmy Koopa. 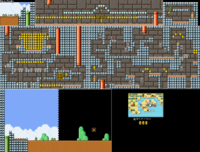 Map of the level.

The level takes place in a castle-like area, with many spikes in the level, requiring the Goomba's Shoe for navigation. This level contains many Thwomps and Koopa Troopas, with three Advance Coins as well. At the start of the level, Mario lands on a floating Switch Block instantly, making navigation to the first Goomba's Shoe possible and providing access to the first Advance Coin. This level demonstrates more utility out of the Goomba's Shoe, such as its ability to defeat Thwomps.