World 5-1 is the first level in Sky Land from Super Mario Bros. 3.

The player starts in an area with a single Buster Beetle, some bricks, a Wood Block containing a power-up, and a Chain Chomp. If the player has a P-Wing, or is powered-up with a Super Leaf or a Tanooki Suit, they can fly to a Warp Pipe leading to a secret area with a treasure box containing a Music Box, which can be accessed by crouching and flying to a small gap on the right or running across while small, and another Warp Pipe that leads the player to an area below the main level with four 1-Up Mushrooms. Above there are three bricks, one of them with a Switch Block, which makes two numbers (two threes in the NES and SNES versions or a three and a four in the GBA version) made of coins appear. After that, there are some Walking Piranhas, another Buster Beetle and two more Chain Chomps, guarding some ? Blocks, one of them holding a Starman. Afterwards, there are more Walking Piranhas and a Para-Goomba, followed by some bricks and the goal. 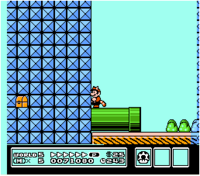 The glitch in action
Retrieved from "https://www.mariowiki.com/index.php?title=World_5-1_(Super_Mario_Bros._3)&oldid=3833683"
Categories: