The Tanooki Suit, or Tanooki Costume,[1] is a fairly uncommon item found in Super Mario Bros. 3 and its subsequent remakes in Super Mario All-Stars and Super Mario Advance 4: Super Mario Bros. 3. It is based on tanukis, Japanese creatures who, according to mythology, can use leaves to shape-shift and cause chaos. The suit is an add-on to the Raccoon form that allows Mario or Luigi to temporarily turn into a statue and become immune to enemies and obstacles, in addition to flying and attacking enemies with tail swipes.

According to Shigeru Miyamoto in the Super Mario Bros. 3 entry of the 25th Anniversary Super Mario History Booklet, he was aware that most players outside Japan would be overall confused with the Tanooki Suit and the transformation, but he left it in because he was too excited to remove it.[2] 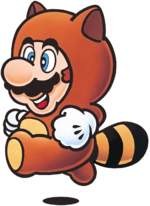 First found in World 4-5, the suit transforms Mario or Luigi into Tanooki Mario or Tanooki Luigi, respectively. The suit grants the same abilities as the Super Leaf, with the added ability of turning into a statue when the player holds

at the same time. This briefly lets Mario hide from enemies and hazards, or stomp even more of them than he can normally if he transforms above them. Mario retains the P-Wing's infinite flight if he grabs a Tanooki Suit while using one. Also, Super Mario Advance 4: Super Mario Bros. 3 adds new utilities to this form that are seen in several World-e levels: its Statue form can reveal Vanishing Blocks (found in A Sky-High Adventure) and break Gray Brick Blocks (found in A Sky-High Adventure and Puzzling Pipe Maze).

If Mario or Luigi defeats a Koopaling while wearing a Tanooki Suit, the restored king will say, "Thank you, kind raccoon. Please tell me your name."

While Tanooki Mario returns in Super Mario 3D Land, the Raccoon form and Tanooki Suit item do not. Instead, Super and Statue Leaves turn Mario into Tanooki Mario, though he cannot fly; the latter Leaf mimics the function of the Tanooki Suit, as it grants the Super Leaf's abilities and the Statue ability (via ground-pounding), but it is available only in the Special Worlds' levels and within Deluxe StreetPass Gifts.

In Super Mario 3D World, despite Tanooki Mario's return, the Statue form and Statue Leaf are absent. The Lucky Bell debuts in its place, acting as the Tanooki Suit/Statue Leaf compared to the also newly introduced Super Bell, as it lets Mario become a lucky cat statue in addition to the latter Bell's abilities.

In Super Mario 3D Land, a picture of Princess Peach in a Tanooki Suit depicts her with a brown skirt. However, in her playable appearance in Super Mario 3D World, her Suit's skirt is replaced by puffy shorts instead.

The Tanooki Suit is prominently featured in a Nintendo Comics System story titled "Tanooki Suits Me"; according to this story, the suit was one of many magical suits made by a tailor named Tanooki, who would sew his trademark tails on the back of each suit. The comic reveals that Mario turns into a statue by pressing a button on the front of the suit, and changes back by wishing to return to human form.

In Nintendo Monopoly, there is a Coin Block/Brick Block card that charges the player $50 for a new suit. The artwork depicts Mario wearing a Tanooki Suit.

In Super Paper Mario, Francis wants a Tanooki Suit that is made out of real tanuki fur.

While the Tanooki Suit does not appear in Paper Mario: Color Splash, a Shy Guy mentions it by saying: "It looks like your upper lip found a Tanooki Suit!"

The Teeth of Tanooki weapon in Mario + Rabbids Kingdom Battle is modeled after the Tanooki Suit.

In the Super Mario Mash-up of Minecraft, the Chain Armor is replaced by the Tanooki Suit.