This article is about the form of Mario that resembles a Hammer Bro. For the form Mario takes after obtaining a Super Hammer in Super Mario Maker 2, see Builder Mario.

“Hey, you! How about lending me your clothes? No dice?! What a drag.”
—Kings, Super Mario Bros. 3

Hammer Mario,[1][2] also referred to as Hammer Brother Mario,[3] is a form of Mario or Luigi only seen in Super Mario Bros. 3 and its SNES and Game Boy Advance remakes, gained when he wears a Hammer Suit.

In this form, Mario and Luigi resemble a Hammer Brother and, like one, are able to throw an infinite supply of hammers in a short upward arc (which can be lengthened by pressing forward on the

). Hammers can defeat most enemies, even those that cannot be defeated with fireballs, such as the Angry Sun, Buzzy Beetles, Boos, Bullet Bills, Chain Chomps, Dry Bones, Firesnakes, Hot Foots, Podoboos, Para-Beetles, Stretches, and Thwomps; they can also defeat Boom Boom and Bowser. They cannot defeat Roto-Discs, Jelectros or Koopalings. As such, this form can be considered a stronger version of the Fire form. As with fireballs, only two hammers can be thrown at a time, but hammers can fly through ceilings, walls, and floors. Mario and Luigi can also block enemies' fireballs in this form by crouching, but they cannot slide down slopes.

Despite the official artwork depicting Hammer Mario with his normal complexion and outfit colors underneath, his NES sprite depicts him with tan skin in levels, a white shirt, white shoes, and black overalls, while his 16-bit sprites depict him with a brown shirt and gray overalls.

This form is not to be confused with Mario or Luigi wielding a hammer, with the difference being the infinite disposable supply of hammers and the black shell armor.

Hammer Mario appears in the second Super Mario Bros. 3 microgame from WarioWare: Twisted!, where it is one of the power-up forms that can be selected. 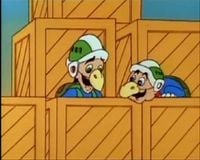