Rotating Blocks,[1] also known as Spinning Blocks,[2] Turn Blocks,[3] or simply Blocks, are yellow blocks with eyes that first appear in Super Mario World. When hit from below or the sides, they briefly spin around, allowing Mario or other characters to pass through them. 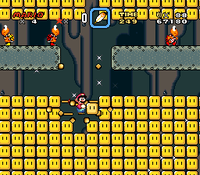 The dummies that appear in the Ring Challenge mode of the soccer sport in Mario Sports Superstars are made of Rotating Blocks, flipping over when they are struck by the ball.

Although actual Rotating Blocks do not appear in Mini Mario & Friends: amiibo Challenge, there are blocks that have an identical design, primarily found in Mini Luigi's world, Moonlight Mansion. They initially appear as transparent Brown Blocks from Super Mario World, referred to as invisible blocks,[4] but they will turn solid and yellow when a nearby candle is lit, allowing the Minis to walk on them.