This is a list of glitches in the game Super Smash Bros. Melee. 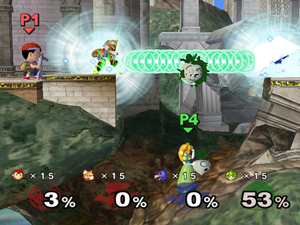 The black hole glitch is a glitch in Melee that causes several of Peach's turnips to become stuck in a small area. If a character touches the concentrated turnips, they will receive massive damage in seconds. There are several ways to perform the glitch. This glitch does not work in Brawl for several reasons, the main reason being the inability to perform the Infinite Super Scope Glitch. It is recommended in Hyrule Temple, but it will work on other stages.

In earlier versions of the game, the player should view the Daisy trophy from the back and look under her hair so the camera clips through it, where an eye can be seen. This is attributed to a faulty UV map. In later versions, the UV had been remapped, removing the third eye.

If Mr. Game & Watch catches three PK flash moves (by using Oil Panic) and attacks, if he moves he will be sent flying through the screen causing an instant KO.

This is one of the harder glitches to perform in the game. Pick the Ice Climbers, and while wall walking up to the opponent, make the partner (Nana if the player is Popo and vice versa) and right as they have the player enemy grabbed have their main Ice Climber do Down+B. The opponent should now be frozen in place. Simply use a Screw Attack item to get them unfrozen. This doesn't seem to cause any damage to the disc.

Yoshi and Kirby will need to be picked then go to any stage. Kirby will then need to steal Yoshi's ability. Kirby will then have to use the copy ability on Yoshi. The player (who is Yoshi) must mash buttons and the control stick to break free. Once Yoshi is free from the egg, he'll be smaller. If done over and over again, Yoshi can become as small as a pixel.[1] 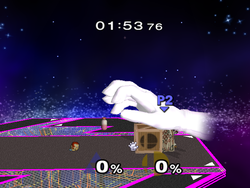 This glitch requires two players in Melee mode. One of the players must connect their controller into the third port and play as Player 3. Player 3 must select "New Name Entry" selection in the nickname menu in the character selection screen, while Player 1 selects "Back" button. Both players must select their option at the same time, and if done correctly, the players should be taken to the Level Select screen. In any stage players choose, Player 3 will be Master Hand. Player 3 will not be able to freely move about, but they will be able to use their moves. Using the laser move will permanently shoot lasers out of Master Hand's fingers. The game will freeze on occasion.

Another technique involves one player. The player should make sure there is one entry and only one in the namebox. Then, they should perform the trick as above. If performed correctly, then it will continue as above. Having another player that's not a CPU while performing the one-player version of this glitch will cause the game to freeze. The game freezes at the end of a match, at some arenas, or at Classic Mode. Adventure Mode does work, but the character cannot move.

The glitch requiring two players can be done with one, by simply having the cursor hover over the name and pressing

at the same time to get the glitch to work. Master Hand can only lose in a stamina match and any kills it gets in cruel/endless melee go to Mario.