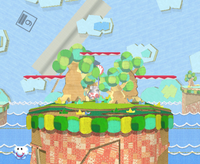 Yoshi's Story is a stage in Super Smash Bros. Melee, and reappearing in Super Smash Bros. Ultimate. It is set in Yoshi's Island, based on its look from the game Yoshi's Story. It features a small island with three platforms hovering above it. The stage features a smiling cloud that is continuously moving; it is either next to the stage, out of frame and under the stage, or hidden behind the stage. When the cloud is next to the stage, either on its left or right side, players can briefly hop on it, and the cloud sometimes serves as an unexpected landing platform for falling characters, as it comes into frame from down below. A group of Flying Shy Guys (called simply Shy Guys in this game) fly along, from time to time, carrying Food - if they are hit, they will drop the Food, which the characters can consume to heal themselves. A Pak E. Derm can also be seen in the trees behind the stage.

In early videos of Super Smash Bros. Melee (such as the early opening, which included some in-game footage towards the end) the stage's layout was different, with the main platform not being flat.[1] This was altered in the final for unknown reasons.