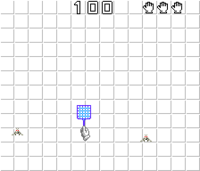 Gnat Attack[1] is a minigame originating in Mario Paint, in which the player must swat different fly-like enemies using a flyswatter.

In Mario Paint, the player controls a gloved hand (similar to the one seen on the title screen) holding a flyswatter using the Super NES Mouse, which must swat flying insects on the screen, before the insect stings the player's hand in one way or another. There are three levels, each with 100 insects; after defeating them, the boss, King Watinga, appears. Completing stages causes characters to walk across the screen. At first, only Mario is seen, then a Koopa Troopa walks next to him, and finally a Goomba, a Spiny, and a Bob-omb. When the player defeats the last boss, it takes them back to level one and adds a small icon in the top left corner of the screen; there is no final level or reward, as the game will loop endlessly, getting slightly harder each time.

Gnat Attack was modified into both a microgame and a bonus minigame in WarioWare, Inc.: Mega Microgame$!, under the names Mario Paint: Fly Swatter and plain Fly Swatter, respectively. The microgame involved shooting the flies as they flew past a fixed target, while the minigame was more faithful to Gnat Attack's gameplay.

In WarioWare: D.I.Y., Gnat Attack was modified into a microgame, under the name Fly Swatter.

In WarioWare Gold, Gnat Attack was modified into a microgame, under the name Mario Paint - Flyswatter.

Gnat Attack makes a return in Super Mario Maker. The minigame is triggered when the player taps and kills all three flies that appear during the editing mode at one particular time. The flies appear either after waiting 15 minutes while leaving the game idle, moving a block, or shaking a Muncher several times; the second method only works at random, and the third is the fastest in terms of effectiveness. Swatting all three flies using the

touchscreen will trigger the minigame. It is split into three stages, with King Watinga appearing in the third stage, like in Mario Paint; each stage is completed once all of the flies in it are swatted, like in the SNES version. Since the game now uses the stylus in place of a mouse, there is no mouse cursor and therefore no need for health; instead, each stage is given a 30-second time limit. The Builder Mario costume for Costume Mario is unlocked upon beating the third stage of this game for the first time. Upon losing any stage or winning the third, the player is given an option to restart at Level 1 or quit to the editor; the game can also be exited early by pausing and touching the can of insect repellent.

The 1.20 update for Super Mario Maker released on November 4, 2015 adds a more challenging version of Gnat Attack with a pink background. It is accessible by shaking a Muncher until King Watinga spawns, then swatting him several times. Completing this mode will unlock the Fighter Fly costume for Costume Mario. 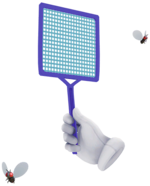 Elements of the minigame appear as an Assist Trophy in Super Smash Bros. Ultimate, under the name Flies & Hand. The flyswatter will hurt any enemies that make contact with it trying to hit the flies.