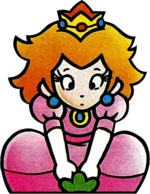 Peach pulling on a tuft of grass in Super Mario Bros. 2

Grass is a common world element encountered in various Mario titles, and first appears as a gameplay mechanic in Yume Kōjō: Doki Doki Panic and Super Mario Bros. 2. In most appearances, characters can pull up the grass to obtain and use various items.

In Super Mario Bros. 2, Mario and company can pull on tall blades of red grass (black in Yume Kōjō: Doki Doki Panic) emerging from the ground by pressing

. While this often pulls out a vegetable, it can also pull out several other objects: Magical Potions, bombs, Bob-Ombs, Turtle Shells, Stop Watches, coins (in Subspace only), or Rockets. Super Mario Advance also adds Heart Radishes and large turnips called Giant Vegetables, which take longer to pull out. They work just like their normal-sized counterparts, but can hit more enemies, due to their bigger size.

Grass returns in Super Mario Advance 4: Super Mario Bros. 3 as an e-Reader exclusive feature: scanning the Blue Green Switch will activate grass patches with vegetables below them in the main game. They also appear by default in several World-e levels - namely Vegetable Volley, The ol' Switcheroo, A Sky-High Adventure, Ice Cubed, Ground Work and Treacherous Halls. The grass is colored green to match the vegetable leaves, and turnips are the only vegetables to appear; they are found in both their unripe and ripe forms, as well as the giant turnip that was introduced in Super Mario Advance. Some grass patches also hide single coins, five coins, 1-Up Mushrooms, or even e-Coins or Poison Mushrooms (in Vegetable Volley only), or Monty Moles (in Ground Work only).

In Captain Toad: Treasure Tracker and its Nintendo Switch and Nintendo 3DS ports, grass is replaced by Pluck Patches, which work the same way.

A tuft of grass in Super Smash Bros. for Wii U

In the Super Smash Bros. games, grass tufts first appear in Super Smash Bros. Melee as 2D background decorations in Mushroom Kingdom II, using their appearance from Super Mario Bros. 2. Peach also has an attack, the Vegetable, that acts as her down special and mimics the function of grass in previous appearances to pull up vegetables from the ground.

Grass later appears as an actual item in Super Smash Bros. for Nintendo 3DS / Wii U. When a player pulls on blades of grass emerging from the floor of the stage, any random item that can normally spawn will be plucked into the player's hands, with status or recovery items activating immediately upon being plucked.

In Super Smash Bros. Ultimate, grass returns as an item and also reappears on the Mushroom Kingdom II stage, with their design now more similar to Super Mario All-Stars.

Grass also has an important role in the Mario Golf series, where it acts as the lie of the ball, and determines the size of the impact bar. It comes in the form of the Fairway, Fast Fairway, Rough, Heavy Rough and the Green. Grass also serves a purpose in Mario Tennis games as a court with fast speed and low bounce.

Grass coverage on other NIWA wikis: