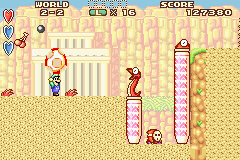 Luigi holding the rolling Yoshi Egg, and the tall jar he got it from.

In World 2-3, there is a ceiling in the soft sand digging area. The player should do a Power Squat Jump with the Key up to it. If done right, the player's character can be stuck in the wall.

Stuck in a Mushroom Block

This glitch best works in Fryguy's boss fight area. If the player slides underneath one of the flying Mushroom Blocks, and the player lets go of

, their top half, will be trapped inside the Mushroom Block. The only way to get out of it is to slide back out.

The player needs a Mushroom Block and a low enough ceiling. The player should jump up while holding the block and throw it while the block is inside the ceiling. If done correctly the block will quickly slide through the ceiling and fall down a few blocks away.