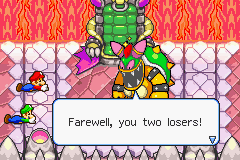 This glitch is triggered by using the advanced version of Cyclone Bros. during the Bowletta fight; if she ends up dizzy, and the player depletes the rest of her HP, she will remain dizzy through the entire following cutscene; in the Japanese version, this will not occur if she was Dark Bowletta during her "defeat". A similar glitch occurs with Cackletta soul's arms and heart if the head is made dizzy.[1] 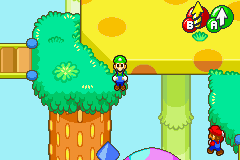 In the first area, the player must head to the second area and get off the mushroom by the gear shop. Then they must face the screen and have Luigi shock Mario. They must walk forwards and towards the mushroom ledge and Mario will be on thin air. Then they must jump as Mario and switch so Luigi is in the front and jump as Mario. He will fly away. Hit START so the camera focuses on nothing and jump as Mario until the camera centers on him. The both jump and they will both be on thin air. Both jump again and they will be above the gear shop. If Luigi jumps first then Mario jumps Luigi will disappear and Mario will automatically land and enter the item shop. Another glitch is to get on thin air and jump as Mario and switch so Luigi is in the lead and change Mario's icon to spin jump. Hit B so Mario flies away and hit it again. Mario will appear on the other side of the mushroom ledge briefly. Hit START and Mario will be on the other side of the ledge and both bros. will be onscreen. Attempting to move will make Luigi appear right behind Mario.

When battling Jojora and her friend, if Mario and Luigi bring Jojora to 1 HP, then use the Advanced Version of Bounce Bros. to defeat her and damage her friend simulatenously, Jojora's dialogue will appear as normal despite her not being present. 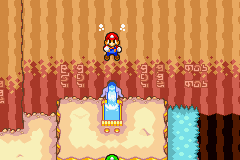 Mario flying away from Luigi

Right after the player acquires hammers, they should make Mario the leader. The bros. must go up to a water fountain and make Mario ingest water. Luigi should then hammer Mario until he runs out of water. When Mario is angry at Luigi, he can fly up. Other times, he can face the fountain. Either way, Luigi walks away from Mario. Even if Mario moves through the wall, he may be refilled with water, and he can move, but he will warp to Luigi, making it appear that he is falling. The game occasionally, however, may also make the brothers clip through the wall, locking the game and forcing the player to restart. This glitch stops working once the Bros. learn the hammer techniques since Mario's angry reaction is replaced by the Mini-Mario technique. 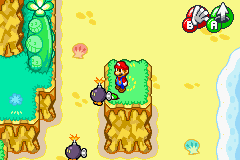 The Racing Bob-omb Glitch, where the Bob-omb sprite appears to be placed in the foreground of the pillar.

There are two basic situations in which this can occur: 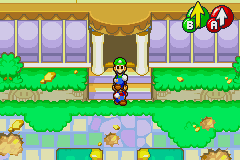 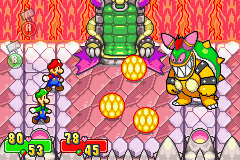 A glitch where Mario and Luigi's hammer action icons are not meant to be shown.

When Bowletta uses her fireball attack, the Hammer counterattack icons can be seen for a brief moment after the attack finishes.

Similar to the above, this glitch is caused during the Bowletta fight. To trigger this, Bowletta's health must be low when she becomes Dark Bowletta and starts throwing stars at the player. If the player throws enough back at her to defeat her, but also gets defeated him or herself, the player will see a mixed scene of Game Over and Bowletta sucking them in. Instead of switching to Bowletta's stomach, the player will come to a black screen, with the eerie tone of Cackletta's slow music being looped until the player resets the game.

There are many situations where the wrong sound is played or sounds are sustained when they should not be. Here is a list:

If the player has Mario turn into Mini Mario, by having Luigi hit him with his hammer and walk into an area where the music changes, the player should notice that the music did not change.[2] Even though this happens with most areas, it does not happen with all places. This can also result in comical effects, such as the underground theme playing in Beanbean Castle Town. Having Mini Mario entering pipes always results in this glitch. However, this will not work upon exiting the warp pipe in Joke's End. The lack of music changes also happens with the Luigi Dunk and even with the advanced Firebrand and Thunderhand techniques, although it works less frequently. These glitches have been fixed in the Japanese version.

Additionally, after Luigi is taken by the crane in Woohoo Hooniversity, if Mario hits the Save Album while moving left and continues to hold left, he will walk a short distance down the nearby staircase. If the player Saves and Quits, then reloads the game save, there should be no music. However, fighting one of the nearby enemies will cause the background music to change to the save-file music. The music will revert to normal if the player does not fight an enemy before saving Luigi, otherwise it will revert back after saving again, after the cutscene with Cackletta, or upon leaving the Hooniversity.

If the player saves at the "Teehee Valley Fungitown Side" Save Album when Mario is Mini Mario, or if Luigi has been Luigi-Dunked, no music will play. The music returns, however, when the player leaves that screen.

Finally, if the player saves and quits when Mario has water in his mouth (like in the Woohoo Hooniversity Basement), then reloads the game, no music will play.

During the cutscene where Luigi begins pulling on one of the Piranha Plants on the runway as Mario begins explaining something to Lady Lima, the gibberish talk Mario makes uses Luigi's voice instead of his.

This glitch can be activated with the last Popple[3] battle (with Birdo) and the Jojora battle.[4] The player must first hurt either Popple or Jojora's friend enough so that a Fire Bros. attack would not defeat it, but the burns will. Second, the player must Burn either Popple or Jojora's friend with Fire Bros., the advanced version being easier to burn. The player then just has to wait until Popple or Jojora's friend succumbs to their wounds. If they use an attack that needs to be countered, the player needs to let it hit them. Once the victim is defeated, their partner will act as if nothing had happened. Birdo will attack normally instead of getting angry and if she uses her egg attack, a "ghost" sprite of Popple will appear onscreen but it cannot be damaged nor can it attack. Jojora will continue to use her wand move, and if the player knocks it away, the game will freeze once Mario and Luigi attack nothing.

Much like the "High Jump Glitch", this glitch will make all sprites from the screen vanish. To do it, the player needs to have the advanced version of the Cyclone Bros.. When finding an enemy, the player needs to fight it. They should use the Cyclone Bros. to make one of the enemies dizzy, then they should defeat the enemy right after. Shortly afterwards, all sprites (e.g. Mario, Luigi, remaining enemies, etc.) will vanish. The music will still be playing, but all the player can do from there is to reset the game.

Note: This glitch will not always work; it works mostly in Bowser's Castle.

Falling off the bridge

While Luigi is going across the bridge to Piranha Bean, if he should fall off the bridge just as he reaches Piranha Bean, the plant eats the bean but will not see Luigi, causing the game to softlock; the Piranha Bean will only stand there until the player resets.

In the beach area, where Luigi turns into a surfboard, if the player steers Luigi onto a nearby shore into a Bob-omb enemy, Luigi will be normal during the battle. Also, if the player defeats the enemies, or opens the suitcase when in midair, the game will freeze.

In Little Fungitown, the player must go to the Toad looking at the Toad on the mushroom. The player must make Mario small and walk towards the Toad. When the player is underneath it, the player should have Luigi High Jump on Mario and make Mario jump to produce a coin. Mario will fall off the ledge, unable to move around and Luigi will be stuck on top of the Toad, still in pain and completely frozen. The player must reset the game after this. 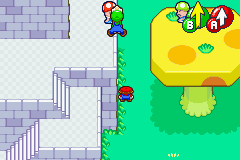 The glitch in action.

To do this glitch, the player must break the empty pillar, then the second pillar with a Bros. Attacks. If Mario and Luigi learns an advanced attack as Hoohooros moves, Hoohooros will not attack as well as Mario and Luigi. Instead, he will watch the bros. forever. 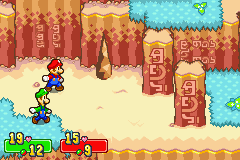 [5]The player must turn their system off and it will be normal.

If the player gives a bro a red or green pepper, and lets the bro get knocked out, upon reviving the bro, the pow/def pepper boost will still be there, and remain there for the rest of the current battle. This makes it very easy to beat bosses if the player has a steady supply of peppers, 1-UP Mushrooms and/or 1-UP Supers without having to waste the clothing slot on a booster clothing such as Harhall's Pants. 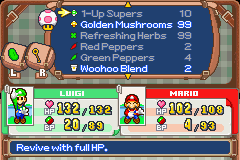 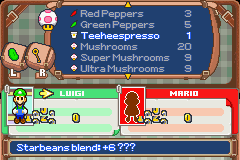 A glitch where Mario and Luigi's stats appear scrambled.

Bosses and scripted enemies within the English releases of the game have an additional 5000 health added to them; this is in order to prevent them from being defeated before their cut scene plays out. Defeating these enemies by dealing more than 5000—done via unusually high stats, Mush Badges, Bros. Attack infinite combos, etc.—will cause the game to become glitched, displaying the victory screen at the same time as a cut scene. This may lead to freezing, invisible enemies, or simply a glitched cutscene depending on the enemy defeated. Enemies that qualify for the glitch include Hermie III, Bowletta, and Cackletta's soul.[6] The Japanese version prevents the enemy's HP from dropping below 4999 outright, thus avoiding this glitch.