This is a list of glitches in the game Mario & Luigi: Partners in Time.

Babies in the wall 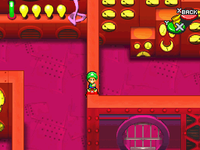 In the Vim factory, go to the room with the red and blue stairs and switches and go to the top-right corner and hop up the steps and go on the left wall path and walk close to the end and stop, half of Baby Mario and Baby Luigi's body will be in the ground. (This glitch only works if none of the switches have been hit.)

In the Koopa Cruiser, walk at the left edge. When the Koopa Troopa calls the babies, Baby Luigi walks to him, but Baby Mario stays, making a motion like he walks. This glitch does not work when playing the game on the Nintendo 3DS or Wii U Virtual Console. 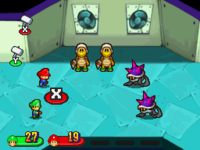 While the Hammer Bros. are teaching Baby Mario and Baby Luigi how to counterattack with the hammer, if Baby Mario lets go of

before the Hammer Bros tell them to, the game will glitch but not freeze. During this glitch, the music will keep playing, the Spiny Shroopas and the babies will keep doing their battle poses, but the hammer symbols will remain on the screen and the Hammer Bros. will not continue their explanation. In this case, the only way to continue is to restart from the last save point.

Everyone looks at the ghost forever

When training on how to jump with Mario and Baby Mario or Luigi and Baby Luigi and everyone gets high POW, if one of them jumps on them, the adult character and the baby character might jump back, and they will stand and look at the ghost forever. The only way to stop that is by turning off the system or restarting all over again.

If the game is paused while on-screen enemies are performing certain motions (usually spinning), they will be unable to move when the game is unpaused. Everything else will work normally.

Anytime after opening the Time Hole to Toadwood Forest, the player must throw the babies into the Time Hole first and let the adult Bros. The player follows automatically, as usual, but, if the player looks at the top left corner of the screen, before the big Bros. fly out after the babies, they can see Luigi facing away from the screen standing on the purple liquid just barely on-screen.

In the caves under Gritzy Desert, in the room where the Big Bros. must roll in ball form and hit an ! Block to move on, the player should go to the area where the ! Block was. Go right and hit

to throw the babies off will make Baby Mario land the normal way while Baby Luigi will fly through the air really fast and land right behind Baby Mario. If they head back to Mario, Baby Mario will climb on right away while Baby Luigi will travel to Luigi really fast without moving and climb on. If Mario goes left, Luigi will walk right and they will be face to face, and if Mario doesn't pass Luigi, he won't move behind Mario like he's supposed to. Then, if the babies are thrown off, they will go past each other and land back to back, with Baby Mario facing Luigi and Baby Luigi facing Mario. 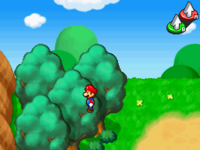 This glitch only works when the player is controlling the adult Mario brothers, regardless of whether they are carrying the babies or not. At the beginning of the fields near Hollijolli Village, the player should head over to the trees in the top left corner and walk behind them. Continue moving up and down as well as forward after heading back as far as possible. If done correctly, the player should head back farther, as well as seeing Mario (with Baby Mario if the babies are on the brothers' backs) standing on top of the trees. If the player moves away from the trees, the glitch ends; vertical movement does not affect it.

If the babies are tossed into one of the two Save Albums where Stuffwell allows Mario and Luigi to use his Warpulator, the action icons become frantic for a moment before disappearing, rather than smoothly moving upward and off-screen when these Save Albums are hit.

NOTE: This glitch is only present in the U.S. version.

If the player lines up Mario and Luigi correctly and use the Bros. Ball, they will be slightly dispositioned and can go through the gate, allowing access to the whole castle and, if the player is skillful enough to make it far enough, they can fight Princess Shroob, Elder Princess Shroob, and Shrowser, the final bosses of the game. The player can clip back out of the castle using a similar method on the other side of the gate.