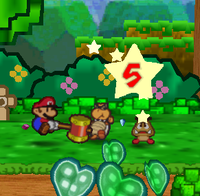 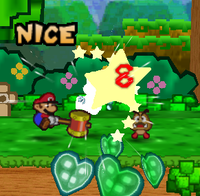 An Action Command (also known as a Timed Attack[citation needed]) is a gameplay mechanic that appears in various Mario role-playing games. It allows a character to do significantly more damage to an enemy than with a normal hit. Often, Action Commands occur when the player presses the

button right before the party member hits their opponent. Action Commands are also used for defense; If the player presses the Guard button at the moment an enemy's attack hits, the character receives less damage or even counters the attack in some games.

In Super Mario RPG: Legend of the Seven Stars, action commands are the key to success in battle. There are four kinds of action commands: Timed Hits, Continuous Hits[1], Star Hits[1], and Rotational Hits[1]. Timed Hits are used both to increase damage dealt by the party's attacks and decrease damage done to the party by physical attacks. They do not actually increase any statistics; they only serve to modify the damage after it is calculated.

There are actually two different levels of Timed Hits; one for timing the command "close" and one for timing it "perfectly". For the party's physical attacks, most Timed Hits are activated by pushing any button right before the attack lands. If an attack is timed close, the damage is increased by 50%, but if it is timed perfectly, the damage is doubled. Any Timed Hit with a physical attack will never miss.

For the party's special attacks, more variation is seen in the commands. Generally, any special attack which requires a single button press will increase damage (or healing) by 25% if timed close or 50% if timed perfectly. Other commands (Continuous Hit by pushing

button, or Rotational Hit by rotating the

) increase damage in other ways. For some attacks, good timing will increase the attack's range from one enemy to all of them.

Timed Hits are also used to avoid or reduce damage done by certain attacks. Only physical attacks may be blocked in this manner, and even some of those are unblockable. For those attacks which are blockable, a Timed Hit is usually activated by pushing any button right before the enemy attack lands. If the command is timed close, the character will only receive half damage, and if it is timed perfectly, the character will receive no damage at all, completely avoiding the attack. For attacks that cause instant death, a normal timed hit will leave the character standing with only 1 HP (and a perfect one will avoid it, causing no damage).

In Paper Mario, Twink gives Mario the Lucky Star, a special pendant from Peach that allows the plumber to perform action commands. This artifact proves useful in the upcoming battle against a Magikoopa; a fight that occurs after Mario visits Shooting Star Summit for the first time. The Dodge Master Badge makes performing action commands slightly easier. For the jump attack, the player must press

when Mario is about to jump on the enemy. For the hammer attack, the player must tilt

left when Mario is about to hit the enemy with the hammer. Some other Badges can alternate the damage blocked or delivered: The Damage Dodge Badge increases the amount of damage blocked by Mario's Guard action command. The All or Nothing Badge increases the attack power if the action command was performed successfully, otherwise the attack(s) do(es) not do any damage.

In Paper Mario: The Thousand-Year Door, Action Commands reappear, and Stylish moves and Superguards are introduced. These allow Mario to recharge his Star Power faster. They can be performed from the start of the game, but have more effect when an audience appears to watch Mario's battles after visiting the Thousand-Year Door for the first time. The All or Nothing and Damage Dodge badges return with the same effects, while new badge Damage Dodge P badge works the same way as Damage Dodge except it is for Mario's partner. The Simplifier badge is introduced, which makes Action Commands easier, but reduces the star power gained from them. The Unsimplifier badge is also introduced which does the opposite.

In Super Paper Mario, Action Commands are not used in battle; rather, they are done when using items. These Action Commands usually implement Wii Remote pointing and shaking. Stylish moves reappeared in the game.

Action Commands return in Paper Mario: Sticker Star, where they are used the same way they were in the previous installments. However, only

is actually used while performing them. As such, some Action Commands that originally require moving the Control Stick have been changed, such as the hammer. Action Commands can also be used with "Thing" Stickers for a better effect. Some require button-mashing while some require precise timing, such as the Cat-o-Luck. The Touch Screen can also be used as a substitute for

Action Commands make another return in Paper Mario: Color Splash, behaving the same way as in Sticker Star. Only

is used, and as the game's predecessor, the GamePad's touch screen can also be used in place of the button. When using a hammer attack, a charge meter is shown to let the player know when to press

. Action Commands can be practiced in the Action Command Dojo. To prepare the Mamma Mia Pizza at Tangerino Grill, Mario is challenged to get an excellent hammer attack and 20 consecutive jumps using Action Commands.

Action Commands return in Paper Mario: The Origami King, acting in much the same fashion as Sticker Star and Color Splash, using only

again. However, touching the screen is no longer a substitute to pressing

. Action Commands can be practiced at the Battle Lab.

In the Mario & Luigi series only, the playable characters can entirely avoid getting hit by enemy attacks by using Action Commands, and can even use this to damage an enemy on their turn; this is known as counterattacking.

When using Bros. Attacks, the player must press the appropriate button at the right moment so the attack can deal more damage at the climax of the attack. If the right button is not pressed in time, or the wrong button is pressed, the move will end up dealing less damage or outright end prematurely without any more damage being done (in the case of the Advanced Chopper Bros. and Knockback Bros.).

While defending against enemy attacks, Mario and Luigi will either jump (pressing either

) or use their hammers (holding down either

; though holding down the button for too long will cause the hammerhead to fall off) to counterattack. When using jumps, the brothers can jump over enemies by pressing their respective buttons to avoid taking damage or even stomp on them to deal damage. When using hammers, the brothers can either hit enemies when they directly attack, or knock enemy projectiles back at them as a means of counterattacking.

In Mario & Luigi: Partners in Time, Baby Mario and Baby Luigi use

respectively when attacking. Using jumps and hammers to (counter)attack remains the same as in the previous game when the brothers are alone, though when fighting with all four together, the Action Commands are different. When using jumps with the baby bro alongside the adult bro, pressing the appropriate baby brother's button will cause them to jump off of their respective adult bro so that the latter can jump on the enemy, dealing two hits to the enemy, which deals more damage than a regular jump. When using hammers, the player can press the adult bro's button to lift up the baby, then press his baby button so the baby can hammer the enemy. 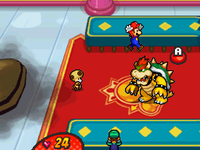 Toadsworth teaching Mario the Jump Action Command during the tutorial battle with Bowser.

In Mario & Luigi: Bowser's Inside Story and its 3DS remake, Mario & Luigi: Bowser's Inside Story + Bowser Jr.'s Journey, Mario and Luigi use the same buttons from previous installments. However, the jump and hammer Action Commands are different; when jumping on enemies, by pressing the appropriate brother's button, they can jump on the enemy again, similar to Mario & Luigi: Partners in Time. When using hammers, pressing the button when the brother rears back enough determines how much damage is dealt to the enemy. The counterattacking Action Commands are the same as in past games.

In this game, Bowser uses the

for his Action Commands during normal battles depending on what move he uses; pressing

for punching (which deals more damage depending on how far Bowser rears back, similar to the bros' hammer Action Command) and holding down

when exhaling fire to deal rapid damage. When using Brawl Attacks, Bowser uses the stylus for his Action Commands. On the enemy's turn, pressing

will make Bowser punch an enemy to counterattack frontal attacks, and pressing

will make him duck under his shell to evade attacks and defend himself from above attacks. During giant battles, Bowser uses the stylus for punching and counterattacking and the microphone (stylus in the remake) for his Fire Breath.

In the remake, the Emergency Block (renamed Emergency Guard) makes a return, functioning the same as it did in Mario & Luigi: Paper Jam and Mario & Luigi: Superstar Saga + Bowser's Minions.

Toadsworth teaching Mario the jump Action Commands during the tutorial battle with Gromba.

In Mario & Luigi: Dream Team, the jump and hammer Action Commands are similar to Mario & Luigi: Bowser's Inside Story's Action Commands, though when counterattacking with hammers, the player can hold down the button indefinitely without the hammerhead falling off/forcing the character to swing the hammer. Also, some Bros. Attacks/Luiginary Attacks, like the Dropchopper, Slingsniper, Star Rocket and Luiginary Ball, require the use of gyro controls. During giant battles, the player uses the stylus for attacking and counterattacking, just like in the previous installment, though sometimes, during a few giant battles (like the Zeekeeper battle) or when using Finishing Bros./Star Driver, they will have to use the Nintendo 3DS's gyro controls.

In Mario & Luigi: Paper Jam, the Action Commands for Mario and Luigi are the same as in the previous installment, though the new playable character, Paper Mario uses

to do Action Commands such as copying himself, using Trio Attacks, and perform the jump and hammer commands that the normal Mario Bros use, though it is done in a different fashion; depending on how much copies Paper Mario has made, it allows him to jump on a single enemy multiple times or hammer multiple enemies at the same time. While defending enemy attacks with a jump, holding down

will make Paper Mario float in the air briefly, similar to how the brothers float in the air when having the Excite Spring equipped in Mario & Luigi: Superstar Saga and Mario & Luigi: Superstar Saga + Bowser's Minions. While defending with the hammer, it is similar to how Mario and Luigi defend with their hammers, though the copies Paper Mario currently have will attack one after the other, making counterattacking with the hammer easier.

As a new addition while defending, pressing

during the enemy's turn will make the trio do an Emergency Block to lessen the damage dealt by enemies.