“I was disappearing...From ice to fog...Returning to the sky...I just wanted a body that wouldn't melt...”
—Mizzter Blizzard, Paper Mario: Sticker Star

Mizzter Blizzard is a Mr. Blizzard that acts as the boss of World 4 in Paper Mario: Sticker Star, as the only member of that species to appear in the game. He takes on the form of the Bowser Snow Statue before revealing his true self. He is fought in Bowser's Snow Fort and wears the blue Royal Sticker.

At the end of the battle, Mizzter Blizzard apologizes to Mario for the trouble and chaos he has caused and hopes to be rebuilt again the next time snow falls so they could meet on more peaceful terms. The Snow Statue form is the largest boss of the game, even larger than Bowser's Giant form. 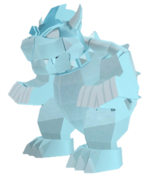 The Bowser Snow Statue without its ice

Mizzter Blizzard starts off the battle as the Bowser Snow Statue, which towers over Mario. As the Snow Statue, Mizzter Blizzard can either stomp on Mario or attempt to freeze him with an icy breath. Every time Mizzter Blizzard loses 100 HP, the Snow Statue breaks down and a smaller is revealed, in a similar fashion to a Matryoshka doll. Each of the smaller Bowser Statue forms are weaker than the last, but their ice breath can still freeze Mario. If Mario uses an ice-based attack, it will heal him. If fire-based stickers are used, the damage dealt to Mizzter Blizzard will increase. Certain Thing Stickers may cause the game to crash when used against this boss, such as the Bowling Ball.