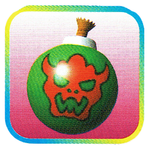 The Bowser Bomb is an item in Mario Party 2. It is obtainable only in item minigames and from the shop on the northeast corner of Bowser Land that forcibly sells players random items. Once obtained, the character reacts in a different manner, not like when receiving another item (complete with the announcer saying "Got Item?" in a confused tone, as opposed to the usual cheerful "Got Item!" with an exclamation). Unlike the other items, the Bowser Bomb activates automatically at the end of the turn before the Minigame event. Bowser will appear at Baby Bowser's location (a former Star Space) and roll three Dice Blocks, then start moving around the board. If Bowser meets a player, he steals all of their Coins. After his turn, Bowser simply disappears.

Bowser's costume depends on the board: 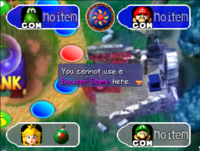 Using a Plunder Chest to steal a Bowser Bomb and then attempting to manually use it causes this text box to appear.
Retrieved from "https://www.mariowiki.com/index.php?title=Bowser_Bomb_(item)&oldid=3716327"
Categories: