Not to be confused with Mr. L.

A Mr. I (also parsed as Mr. I.[1] or Mr I[2]), also known as a Spinning Eye[3] or Eyeball,[4] is an enemy species in the Mario franchise, debuting in Super Mario 64. Its name is self-descriptive; Mr. I's seem to be nothing more than giant eyeballs. Additionally, Mr. I's are usually immobile and only rotate in place. A larger version, Big Mr. I., has also appeared as a boss. 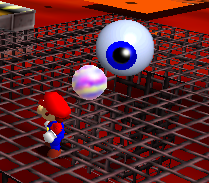 A Mr. I. shooting a bubble

In Super Mario 64, Mr. I.'s only shoot pink bubbles at Mario from their pupils. They always watch Mario when he is close, and they can be dizzied into submission if Mario runs in a circle around them in either direction, rewarding Mario with a Blue Coin. The standard Mr. I.'s can be found in Big Boo's Haunt, Lethal Lava Land, and the Hazy Maze Cave. After being dizzy, Mr. I.'s slightly shrink before dying. The much larger version, Big Mr. I., is in the attic of Big Boo's Haunt.

In the remake, Super Mario 64 DS, the pupils of Mr. I's are now oval-shaped, and said pupils are now dark blue instead of black. Also, the bubbles were changed to balls of light that change color, but they are primarily turquoise.

Mr. I. appears in Mario Party 2 in the Horror Land board, where he offers to "warp" the player across the board for ten coins, though his "warping" actually involves him rolling and chasing the player (and any others along the route) to the other side of the board.

In Mario Party 3, a Mr. I. (referred as "Big Mr. I" in localization) is featured in the Battle minigame Eye Sore. The objective of the minigame is to run around the Mr. I. fifteen times until he finally disappears. As the characters run around the Mr. I., he will gradually shrink. Players should avoid bumping into the Mr. I. or one of the many Podoboos that pop up, for they will stun the player for a few valuable seconds.

A Mr. I appears in Mario Party 5 as a weapon in Super Duel Mode. It shoots a blue laser to stun enemies. 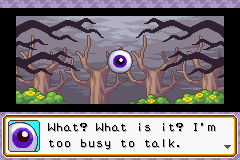 A Mr. I appears in Mario Party Advance as an NPC who lives in the Horror Area of Shroom City. He is in love with Princess Peach and his quest, Love That Princess!, requires playing as Peach. As her, the player must go over to Mr. I's residence. When he sees Peach, Mr. I shows his love for her by giving her the Gaddget, Hope Chest. He is also the crush of Flutter; he does not return the favor because he hardly knows her and is already in love with Peach, and he tells the player to tell her he is sorry. He is also one of the three suspects when the Koopa Bank is robbed. He states that he is not guilty, but he remembered hearing coins jingle. The ending states that he is learning to wink for Peach.

Two Mr. I's in the minigame Eyebrawl in Mario Party 8

In Mario Party 8, Mr. I's appear in the minigame Eyebrawl, where instead of running around them like in the minigame Eye Sore from Mario Party 3, the player must draw circles around them with the Wii Remote. As of this game, the irises and pupils of the Mr. I's take on a more oblong shape, like in Super Mario 64 DS. The Mr. I's are not defeated the first time they get dizzy; instead, the Mr. I's reappear twice in progressively enlarged forms. Whoever defeats all three Mr. I forms first wins the minigame. The loser is haunted by small Mr. I's.

In Mario Golf: Toadstool Tour, the name "Mr. I." can appear on the leaderboard.

In Super Paper Mario, Mr. I, written as Mister I, appears in Merlee's Mansion and Castle Bleck; these Mister I's are immune to conventional attacks, and they can be defeated only by running around them repeatedly while using Mario's Flip technique. Alternatively, the player may use Fleep's ability on them to defeat much easier. A total of three can be found in the game. In this appearance, Mister I's attack the player by shooting them with a cyan laser beam, like in Mario Party 5. The game also introduces a subspecies of Mister I called Red I.

Encyclopedia bio: "Giant floating eyeballs. Run circles around them to stop them from seeing straight."

Mr. I as it would have appeared in Minecraft: Wii U Edition