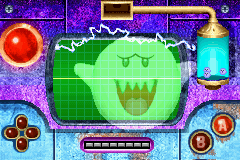 A discovered Boo attempting to escape.

The Porta-Gust is a Gaddget found in Mario Party Advance. The name is a pun on the words portable, and Poltergust. This Gaddget is obtained by helping Snifit in the Horror Condo by asking Boos from a nearby cemetery to haunt it in the Condo of Mystery! quest. The Gaddget is a ghost hunting simulator that shows a radar, and the player must press and hold the directions that light up on the

in the lower left corner to approach the Boo. The closer the player comes to the Boo, the more the graph will react. When it begins shaking violently, the player must press and hold the

button as soon as they see the Boo on the screen. It will be sucked into a jar which can hold eight Boos at most. To vacuum up more, some have to be released by pressing the

"Use the + Control Pad while watching the sensor. Use it when Boo appears."