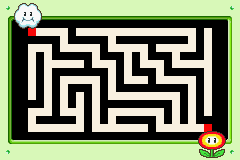 Mini Maze is a Gaddget found in Mario Party Advance. It can be obtained by completing the quest Monkeynapping!?.

As the name implies, Mini Maze can be used to play a maze minigame. The player must reach the end of maze, which has a total area of 299 squares (23 squares wide, 13 squares high). The maze can be computer generated by pressing the A button. The general maze design is simple with white squares acting as pathways and black squares acting as walls. Once the player has generated the maze, the player must find the path leading to the Fire Flower. The player must use the Lakitu's Cloud as a reference point for the beginning of the maze. The player can generate another maze by pressing the A button.